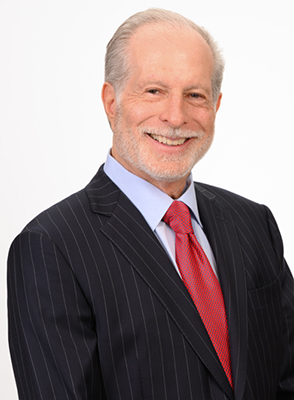 The founding member of Alan Goldfarb, P.A. and a renowned trial lawyer widely recognized for his courtroom skills, Alan Goldfarb represents victims and their families in all types of personal injury cases. In a career that spans more than three decades, he has tried more than 250 cases to verdict, helping clients achieve more than $250 Million dollars in verdicts and settlements. From electrocution deaths to products liability claims, the firm’s caseload spans the spectrum of the law. Mr. Goldfarb’s most persistent motivation is the desire to care for his clients and he remains friends with many of them to this day.

Mr. Goldfarb grew up in Miami Beach, and attended Clemson University on a full basketball scholarship where he was a Division I player and later became an All American Basketball Player. He returned to Miami and obtained his J.D. from the University of Miami School of Law in 1972.

Mr. Goldfarb’s respect comes from his clients and his peers. He has been named for inclusion in “The Best Lawyers in America”, he has been selected to the South Florida Legal Guide as a best attorney in South Florida since 2001, has been listed in “Florida Superlawyers” since its inception, and is AV-rated by Martindale Hubbell. He has also been among the top 1.9% of Florida attorneys to be nominated by peers for inclusion in “Florida Legal Elite” for every year of its publication.

Mr. Goldfarb is a member of The Florida Bar and the Dade County Bar Association. He is also a member of the American Bar Association. He has been admitted to practice before the United States District Court for the Southern District of Florida. He is admitted to practice before the Supreme Court of the State of Florida (1972) as well as the Supreme Court of the United States of America (1998). Mr. Goldfarb is a founding member of “ABOTA”, American Board of Trial Advocates; a member of the Florida Justice Association f/k/a The Academy of Florida Trial Lawyers; The Association of Trial Lawyers of America, Law & Leading Attorneys, and EAGLE.