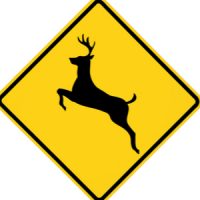 The life of a Graceville, Florida woman was tragically lost after an airborne deer that had been struck by a truck went through her windshield. Eighty-one-year-old Edna Morgan Griffin was a passenger in the vehicle of Katherine Millis Comerford when the accident occurred. Comerford sustained serious injuries and was taken to a nearby hospital for treatment. Her condition is unknown.

Jessie Alton Barnes was the driver of a 2018 Dodge Ram that hit the deer as it crossed the highway. The deer then flew through the air where it struck Comerford’s 2010 Ford Escape. The deer went through the car, striking both people inside before exiting through the back window.

Barnes was driving with two other passengers and no one in their vehicle was injured.

Is There a Personal Injury Case Here?

While your instinct might be to say that this was an Act of God, the first chain in the sequence of events that caused this tragedy was the driver of the truck striking the deer. What happened afterward is certainly unusual, but there was a human cause that produced these consequences. If the injured driver makes the claim that the driver of the truck was speeding or otherwise violating some rule of traffic, then it’s distinctly possible that they could file a lawsuit against that driver even though it was the deer that did most of the damage. This will not be easy to prove, however.

In this case, an accident reconstruction specialist may be able to calculate the speed at which the driver of the truck was going in order to cause the deer to file through both the front and back windshields and kill a passenger. If this speed is in excess of the speed limit on that road, then a lawsuit against the driver could still be possible.

However, those who rendered assistance on the scene did not charge the driver with reckless driving or write a ticket, which generally would hurt a plaintiff’s case. Unless negligence can be established, there would be no way to recover damages. It’s just chalked up to really bad luck.

For a plaintiff to bring a successful lawsuit against a driver, they must be able to establish that the driver was guilty of some kind of negligence. Legally, negligence is defined by a three-factor test:

When these three facts are established, you have a successful personal injury lawsuit. That the defendant owed the plaintiff a duty of care is established by law via the rules of the road. But in the case above, it’s unclear that the pickup truck driver failed in their duty of care.

If you think a negligent party should pay for your medical expenses and other losses, the Miami personal injury attorneys at the office of Alan Goldfarb, P.A. can help determine the merits of your case. Call us today for a free no-obligation consultation.