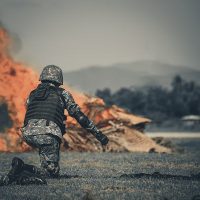 The same issue is now occurring after the second Gulf War initiated by President George W. Bush a decade later. Soldiers say they are coming home with respiratory issues that they believe are related to the burning of garbage near military bases in Iraq. Some of the individuals filing these were exposed to a sulfur fire in Iraq, but not all of them were. The cause of their symptoms remains unknown, but so far, the only theory is that garbage fires resulted in lung damage.

Otherwise healthy soldiers returning from Iraq report symptoms of being winded or out of breath after going up stairs or any basic physical exertion. In other words, their showing symptoms similar to emphysema but their lab reports appear normal. Upon further inspection, however, biopsies revealed that the soldiers had small airway damage. The soldiers were diagnosed with constrictive bronchiolitis. The damage could not be uncovered without using invasive screenings such as a lung biopsy.

What did the VA do?

After early initial collaborations between military doctors and the doctor who discovered the problem, the matter fell through abruptly. The military said that changes in command divisions was responsible for the oversight, but the doctor did not believe them. The doctor maintains that the military realized the implications of admitting the problem was real would cost them millions of dollars and now they are moving to pretend the issue doesn’t exist. So, it’s just like Gulf War Syndrome 1, at least as far as the VA’s approach to paying out claims related to injuries suffered by their veterans. At this point, the military cut off all cooperation between themselves and the doctor.

Right now, there are more than 200,000 people, military and civilian contractors who believe they suffered permanent injury due to American burn pits for garbage disposal. Symptoms range anywhere from shortness of breath to rare cancers. Meanwhile, the VA contends that there is a lack of “conclusive data” to support a finding of fact in favor of the injured, but for how long they’ll be able to maintain that position remains a mystery. What is clear is that the military doesn’t want to pay former soldiers who were injured due to military burn pits.

The Miami personal injury attorneys at the office of Alan Goldfarb, P.A. file negligence lawsuits on behalf of injured Florida residents. Call today to schedule a free consultation and we can discuss your options moving forward.