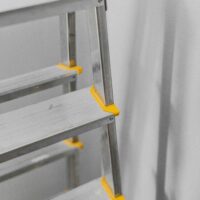 In a plotline that sounds like it was borrowed from the Irish Pub classic Finnegan’s Wake, one plumber injured his spine, hips, and ribs after falling from a ladder manufactured by Louisville Ladder Inc. He then sued the company for $3.1 million alleging that the ladder was responsible for his injuries.

The plaintiff’s case centered around the belief that the ladder was defective in design. That it forced users to shift their center of gravity unsafely, and this made it tremendously difficult for users when attempting to go down the ladder. In addition, the plaintiffs argued that the ladder failed to comply with American National Standards Institute regulations.

Louisville Ladder Inc. denied all the allegations and the jury found in their favor. What happened?

How Louisville Ladder Won the Case

Strict liability is much easier to prove than negligence. In this instance, the plaintiffs alleged both. The liability due to negligence was dismissed because Louisville Ladder Inc. did in fact supply customers with instructions on the proper use of the ladder.

In a strict liability case, the plaintiff need not prove negligence at all. They only have to prove that the product was responsible for their client’s injuries. In this case, they couldn’t.

The defense argued that the plaintiff owned the ladder for 6 years prior to the accident. He had, in fact, used the ladder twice that day without sustaining any kind of serious injury. If the defendant had used the ladder safely for 6 years and nothing changed concerning the structural integrity of the ladder, then how can you hold the design itself to be at fault in a personal injury lawsuit?

The plaintiff was able to produce an expert witness who was willing to testify on the structural problems concerning the ladder. However, the defense filed a motion to block the witness’s testimony. In all likelihood, the foundation of the plaintiff’s case was built on this witness’s testimony. On the other hand, it still doesn’t explain how the plaintiff could have used the ladder for 6 years without incident, and then suddenly the ladder is to blame for his fall.