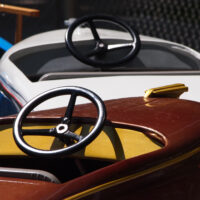 The mother of a 10-year-old boy is suing two companies that operated rides at the Florida State Fair alleging that one of those rides is responsible for her son’s injuries. The ride responsible for the personal injury suit is a ride that has existed in various incarnations for decades. It spins the riders around quickly and uses centripetal force to cause them to “stick” the wall. In the earliest versions of these rides, the floors would simply drop out from underneath you.

Due to lawsuits or the potential for a malfunction, newer incarnations simply move the floor downward. If power were to go out or the ride malfunctioned for any reasons, riders would not drop 20ft to the ground.

This incarnation of the “Devil’s Hole” ride featured “couches” that riders stood on. The couch lowers while the rider stays where they are.

Conflicting Reports of What Happened

According to the fair officials, the child was not in the correct position and the individual responsible for running the ride instructed the child to stand correctly prior to the injury. Attorneys for the parents of the injured child, however, are claiming that the ride itself malfunctioned. When everyone else’s couches were descending, the child’s was ascending. This resulted in head injuries to the child.

Both agree is that the child hit his head on the ceiling of the ride, but an independent investigator said an individual would have to be over 7 feet tall for that to be possible.

So, we know that the child was injured, and we know that something went wrong. What we don’t know is whether or not the child’s actions resulted in something go wrong or some malfunction in the ride itself caused the injury.

A state investigation, however, concluded that it could find no evidence of malfunction with the ride.

What about Strict Liability?

Plaintiffs in personal injury lawsuits do not always need to prove negligence. In some cases, only the fact that an injury occurred because of a product is enough to be entitled damages in a lawsuit. Unfortunately for this family, strict liability does not apply to amusement park rides.

It is assumed when an individual goes on an amusement park ride that they are taking some risk. So long as the amusement park takes reasonable precautions to ensure that the ride is functioning properly and there are no safety issues that they’re aware of, a lawsuit against a park is likely to fail.

In this case, the evidence heavily favors the companies that ran and set up the ride. Multiple reports said that the ride was functioning properly. That leaves only the child to blame for the incident.

If the plaintiff wants to keep this case going, they will have to find a witness who will corroborate their claim that the ride malfunctioned. Otherwise, they don’t have a leg to stand on.

Have You Been Injured?

If you’ve been injured and it wasn’t your own fault, then you may be entitled to damages. Contact Alan Goldfarb, P.A. in Miami at 305-371-3111 and we can get started on your case right away.