What Happened the Day Before the FIU Bridge Collapsed? 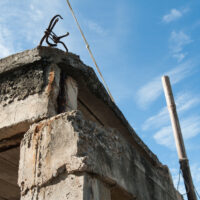 There are still a number of unanswered questions when it comes to the fatal FIU bridge collapse that devastated so many lives last year. The National Transportation Safety Board is still methodically conducting their investigation and does not seem likely to render an official report until the end of the year. Meanwhile, the companies who have been named in the lawsuit are not in agreement about what happened during a meeting the day of the collapse.

What we know so far is this: The bridge lacked any redundant support features and at least one engineer expressed serious concerns about the bridge’s design before it was even built. After it had been constructed, cracks began forming in the bridge and this appears to be what the engineers had been called in to discuss.

Inaccuracies in the Minutes?

The minutes of the meeting were taken by Bolton Perez and Associates. The company specializes in transportation engineering. However, FIGG Engineering Group disputes the contents of the minutes and, in turn, prepared its own minutes to dispute what had been talked about during that meeting.

The meeting that occurred on March 15 was held hours before the bridge collapsed later that day. At least one company is not happy that these new minutes have been submitted without their knowledge or consent. The Louis Berger Group was hired by FIGG to ensure that their bridge design complied with federal safety standards. In the process of redrafting the minutes, FIGG drafted several additional copies that it passed through its legal team before settling on an official copy. Sensing correctly that there may be a liability issue here, the Louis Berger Group is demanding access to the rejected minutes. FIGG, in response, is asking the judge to keep their drafts private. But they’ve already made a huge mistake in even admitting that these drafts exist in the first place. FIGG apparently “inadvertently” disclosed a copy of their revised minutes to a fellow defendant in the lawsuit before it had the clearance to be entered into the official record.

Making Up Your Own Minutes?

As ridiculous as all this must sound, FIGG is establishing what happened according to its recollection. The meeting, which took place from 9 am to 11 am, was ostensibly convened for the purpose of addressing the cracks that had been forming in the bridge. It does not appear that FIGG acted on any information related during the meeting or concluded that there were any safety concerns given the cracks in the bridge. While FIGG is clearly liable for a number of reasons, if they chose to ignore concerns related to the bridge, they may be liable for much more than compensatory damages. As it stands, there are six deaths and numerous injuries related to the bridge collapse. One strategy at FIGG’s disposal is to spread the liability among multiple defendants. Otherwise, FIGG could find itself foot the bill for the majority of a billion dollar suit. Hence why the Louis Berger Group is so interest in the drafts of the minutes their lawyers rejected.

The office of Alan Goldfarb P.A. is representing plaintiffs in the FIU bridge collapse and can help you recover damages for your injuries as well. Give us a call or talk to our Miami personal injury attorneys online to set up an appointment.