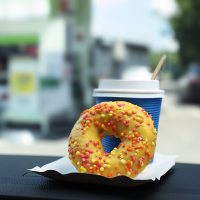 In our blogs, we’ve talked a bit about hot coffee spills and the mother of all tort lawsuits, the McDonald’s verdict in which a woman successfully sued and won millions of dollars after she spilled hot coffee on herself.

Now, a new lawsuit has been filed with similar allegations. A woman claims she was injured at Dunkin Doughnuts by scalding hot coffee that was spilled on her by an employee. To make matters worse, the employees mocked the woman after she was burned. Now, she’s steaming mad and she wants Dunkin Doughnuts to pay up.

Most coffee lawsuits are the same and this one is no different. A person is burned at a drive-thru after the clerk fails to fasten the lid on the cup properly or ensure all the cups are secured to the tray.

This incident is slightly worse. After the woman was burned by the hot coffee that spilled into her seat, she got out of the car screaming and ripped her leggings off, exposing herself in full view of the other patrons. The employees, however, could not contain their laughter at the sight of a woman jumping around the parking lot ripping her clothes off.

Meanwhile, the burns caused nerve damage and left permanent scarring. The plaintiff is suing for injuries caused by the burns and intentional or negligent infliction of emotional distress.

The woman’s injuries are so severe that she will never be the same again. She suffered burn injuries to her buttocks and thighs, which are areas of the body that are considered sexual. Her physical beauty is diminished, and hence her confidence is diminished.

A second consideration is whether or not the employees acted cruelly to the woman. The incident is the type of thing that you would expect to see in a slapstick comedy movie a la Leslie Nielsen. A woman jumping around a parking lot in severe pain while ripping off her leggings is funny when the context is a television show. When the context is a woman whose crotch you just burned, it might take some sort of empathy deficit to produce that laughter. So, on top of being burned, the woman will also claim that she was intentionally humiliated by the employees after her injury which added to the overall emotional toll of the event.

Emotional distress allegations can only be added to lawsuits already alleging injury. Lawsuits alleging only emotional distress (without physical injury) are nearly impossible to win because the standard of despicability is so high, that most acts wouldn’t qualify. An example might be someone convincing a mother that her child has died, and then it turns out only to be a joke.

The Miami personal injury attorneys at the office of Alan Goldfarb, P.A. represent the interests of plaintiffs in lawsuits against negligent actors. Call today to schedule a free consultation and discuss your situation in more detail.