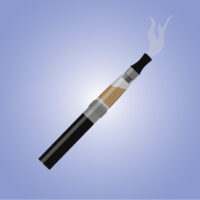 E-cigarettes are becoming increasingly popular, but you’ve likely heard at least one story about a man whose cigarette exploded in his face causing severe injuries. If you haven’t, this is your chance.

In cases where the cigarettes do explode, there is usually some question as to whether or not the individual who was smoking the cigarette attempted to modify the device. So-called mod boxes are common among those who take their vaping very seriously. In other cases, the explosions can be related to the lithium battery used to power the device.

For those who don’t know, e-cigs operate on a heating coil that vaporizes the liquid in a tank. The vapor is then inhaled as a nicotine delivery system. While largely considered to be a “safer” option than inhaling smoke, stories about the cigarettes exploding in faces have dampened some of the enthusiasm surrounding the devices.

According to the lawsuit, the e-cig explosion ripped off a large chunk of the man’s upper lip and cheek flesh. In addition, battery acid from the battery splashed onto his skin causing chemical burns. The lawsuit contends that the explosion was violent enough to leave burn marks on the ceiling. As a result, the man required 65 stitches and missed considerable time from work. The plaintiff has targeted three companies in the lawsuit including the company that designed and developed the lithium battery that purportedly caused the explosion.

Lithium-ion batteries are used in a number of devices. These include laptops, phones, and today, even cars. While these batteries are, by and large, safe, there is a chance that they can experience a catastrophic failure known as “thermal runaway” where the temperature hits 1000℉, ignites, and explodes.

Reports concerning the unique problems that e-cigarettes face in terms of lithium-ion batteries strongly recommend that companies discontinue the use of lithium-ion batteries in the device. However, mod boxes and other such offerings allow vapers to essentially build their own rigging and this can potentially lead to situations like the aforementioned. At least two people have died as a result of these explosions and over a hundred have suffered injuries, some of them quite severe.

The question will be: What (if any) modifications did the plaintiff make to the device and was the device being used in a way that the companies named in the lawsuit could have reasonably predicted? In some cases, the explosions are related to negligent charging or are modified in unsafe ways.

If you have been injured by an exploding device, you can expect that the company whose device injured you will try to blame you for the accident. The Miami personal injury attorneys at the office of Alan Goldfarb P.A. have years of experience battling companies that manufacture unsafe devices. Talk to us today for a free consultation.