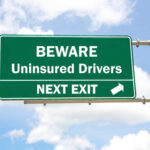 What Happens In Florida When An Uninsured Driver Causes An Accident?

This happens more frequently than it should. An unsuspecting motorist is involved in a car accident caused by another driver that does not have insurance. While Florida has stiff penalties for driving uninsured, that doesn’t prevent some motorists from allowing their coverage to lapse. According to reports issued by the Florida Insurance Council, Florida… Read More »

A speeding car crashed into a minivan along Hollywood Boulevard west of Interstate 95 (I-95) in Hollywood, Florida. The collision caused the car to burst into flames, killing the three occupants inside. The driver of the minivan had to be taken to the hospital with serious injuries. Police indicate that the sedan was speeding… Read More »

Florida has earned itself quite a reputation for poor drivers – but a recent study by an insurance company has been released that seems to contradict what we have been led to believe. The study finds, it seems, that Florida drivers are actually the second best in the country. For those skeptics out there,… Read More »

Florida has one of the highest rates of uninsured drivers in the country, at approximately 25%, and with a similarly high rate of underinsured drivers (drivers who opt to carry the state mandated minimum coverage, which is far lower than would be required to cover the majority of accident situations that may occur on… Read More »

Protect Yourself from Florida’s Uninsured Drivers

Florida has one of the highest rates of uninsured drivers in the United States. Nearly a quarter of Florida drivers do not have car insurance. This means that when an uninsured driver causes a car accident, there is no coverage available for injured drivers or passengers to pursue in a personal injury lawsuit. The… Read More »

Uninsured Motorist Insurance Protects You and Your Family

If you were in an accident with an uninsured driver and you don’t have uninsured motorist coverage (UM coverage), you may find it difficult to seek compensation for unexpected medical expenses, lost wages, and other non-economic damages (e.g. permanent disability). While you may have auto and medical insurance to cover many of your expenses,… Read More »

Uninsured Motorist Insurance: How Does it Work?

No one wants to get in an accident. Accidents are dangerous, costly, and interrupt the lives of the victims. Unfortunately not wanting to get in an accident won’t prevent a Florida driver from going through such an ordeal. “At least,” you might say to yourself, “I have insurance and the person at fault has… Read More »

Uninsured Motorists in Florida: A Problem

Florida has a problem with uninsured and underinsured motorists. In a recent study by the Insurance Research Council, it was shown that Florida has the second highest number of uninsured motorists in the country with 3.2 million. In first place is California with 4.1 million, and in third place is Texas with 1.6 million…. Read More »