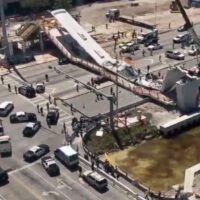 On March 15, 2018 at approximately 1:45pm, the newly installed pedestrian bridge at Florida International University’s main campus collapsed. The pedestrian bridge spans SW 8th street and was intended to serve as access for students and neighboring residents.  Multiple fatalities and injuries are being reported.  The Law Offices of Alan Goldfarb, P.A. represented multiple victims of the garage collapse at Miami-Dade College’s West Campus in 2012 and a subsequent collapse in 2015. If you or a loved one were the victim of the pedestrian bridge collapse, contact our law office at 305-371-3111 for a consultation or legal advice.

By Alan Goldfarb, P.A. | Posted on March 15, 2018
« State Of Florida Considers Stiffer Penalties For Texting While Driving
Alan Goldfarb Believes the FIU Bridge Project May Have Been Rushed »