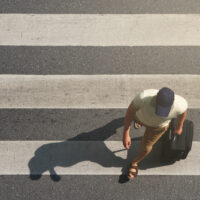 When a pedestrian is hit by a motorist, the ramifications are usually severe. For example, a pedestrian who was crossing near Alton Road and Sixth Street in Miami Beach died after being struck by a car, according to NBC Miami. The pedestrian died at the scene.

If you suffered a serious injury after being hit by a motorist while crossing the street, or you lost a loved one in a collision, you should consider filing a personal injury or wrongful death lawsuit to seek compensation for the following harms and losses:

If you lost a loved one in a crosswalk accident, you can pursue all of the above-described damages, in addition to the following:

In many instances, pedestrians are hit by motorists who were negligent in some form or fashion. Negligence is basically a breach of a duty that proximately caused injuries to a plaintiff. The following actions, or inactions, by motorists are generally considered to be forms of negligence:

What If You Were Partly Responsible for Causing the Accident?

In some instances, there may be fault assignable to both a pedestrian and a motorist. If you find yourself in this situation, do not fret. Florida is a comparative negligence jurisdiction. This basically means a jury can assign fault on a percentage basis so the negligence is shared and your financial recovery is reduced (but not barred entirely). This is a much more equitable system than what is used in some other jurisdictions like Virginia, North Carolina, and Maryland that prohibits a plaintiff from obtaining a financial recovery if they were even just one percent at fault.

If you suffered a serious injury after being hit by a motorist in Florida, it is important to take legal action sooner rather than later. You need someone to go to work for you to investigate the collision and build a persuasive case on your behalf. The Miami crosswalk accident injury lawyers at the office of Alan Goldfarb, P.A. are ready to help.