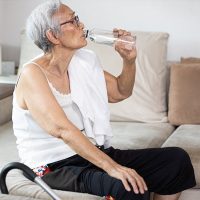 The landlords of a Chicago senior living facility are being sued after three of their residents, aged 68 to 76, died during a heatwave. A family member of one of the residents found their loved one dead in her apartment. It was 102 degrees at the time. Two others also died prompting outcry from the public.

According to the building managers, the City’s health ordinances require temperatures be kept at at least 68 degrees until June 1. Some of the units in the apartment were actually funneling heat into the rooms. The ordinance does not require that the heat be on during a heatwave. It only sets a minimum temperature for the apartments. The company is trying to use the ordinance as an excuse as to why the air conditioning was not turned on. There is no ordinance in the city that prescribes how hot an apartment is allowed to be.

An attorney representing the plaintiff said that the decision not to turn the air conditioning on rises above mere negligence and gross negligence or willful misconduct. In this case, the landlords’ decision cost the lives of three people. It is unclear how much money was saved in the effort to reduce costs associated with air conditioning, but the resulting wrongful death lawsuits will eat through any profits very quickly.

Apparently, the defendants will claim that they were abiding by a city ordinance that required them to ensure the heat was at least 68 degrees in all of their residential units. However, no one is going to believe that the city prevented them from turning on the air conditioning even when the individual units were over 100 degrees. Misinterpreting an ordinance is not a defense against a wrongful death lawsuit. That being said, ordinances are sometimes penned without the necessary forethought required to make them useful. This appears to be one such case.

The landlords will have to pay out the wrongful death lawsuits regardless of the city’s ordinance because they denied multiple requests for air conditioning even when the temperatures were potentially fatal. It is more likely that a jury will believe that was only a pretense to cut costs and a lie they told to the residents to avoid them going to the police than the idea that they actually believed they were obeying the law by denying dying elderly people access to air conditioning.

This is exactly the type of lawsuit that settles for millions of dollars that you never hear about because the defendants want to put a gag order on the settlement. They’ll look to pay to make this go away quietly, the city will draft a better ordinance, and hopefully, prevent this from happening again.

The Miami personal injury lawyers at the office of Alan Goldfarb, P.A. represent the interests of injured tenants in landlord liability lawsuits. Call today to schedule a free consultation and learn more about how we can help.