Man Sues Friend After Neck Injury In A Pool 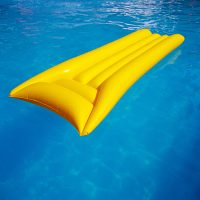 A group of 21-year-old men were playing in a pool when one of the individuals decided to jump off the diving board onto an inflatable raft. The man catapulted off the raft and struck his head on the bottom of the pool suffering spinal cord injuries. He has since sued the parents of his friend who owned the property for a reported $9 million. He claims they are responsible for the fact that the raft was in the pool at the time of the accident. His lawyers say that had the raft never been there, he would never have suffered any spinal injuries. The plaintiff was left paralyzed from the waist down.

In a lawsuit like this, it’s important to remember that fault for an incident is not all or nothing. In this case, the plaintiff could be held liable for 75% of the blame for his own injuries and still wind up with 25% of $9 million, which is no small figure.

The property owners are blamed for allowing the raft in the pool and for failing to supervise their 21-year-old guests. They are also blamed for not imposing any safety rules on their guests. The parents, of course, blame the injured party for their own injury.

Juries don’t like these sorts of lawsuits because they feel like it is a waste of their time. Here, the plaintiff is clearly responsible for doing something reckless that resulted in his own injury. Since he is not a small child, the jury will likely not believe that the family that owned the pool was negligent for not supervising them. Further, if the men disobey common sense when they are playing in a pool, it isn’t the responsibility of the parents to ensure they are being safe. They’re grown men.

That being said, there are some grounds for a negligence action against the parents. It would be better if they were suing a company instead of a private property owner, because the proprietor would have a stronger duty of care to the plaintiff and a private pool owner does not have the same responsibilities toward their guests that a company does.

The sense of filing a lawsuit like this is that the costs of dealing with a spinal injury can be immense. So even if the jury determines that the plaintiff is 90% responsible for his own injury, he might still walk away with a million dollars. But then again, the jury may reject his claim entirely or, as happened once in Florida, assign the plaintiff 99% of the blame just to get their message across.

The Miami personal injury lawyers at the office of Alan Goldfarb, P.A. represents the interests of injured plaintiffs in personal injury lawsuits against negligent defendants. Call today to schedule a free consultation and learn more about how we can help.