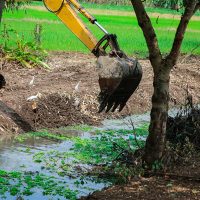 A doctor riding a motorcycle was killed along a dirt road when a tree fell directly into his path and hit him square in the face. As a result, his family filed a wrongful death lawsuit against the park where the plaintiff died. The plaintiff was a member of the park, according to the lawsuit, and was wearing all of the best protective gear at the time of the accident. But it made no difference. According to his attorney, the tree shattered most of the bones of his skull and he was killed instantly.

According to the owner of the park, he was on a trackhoe at the time of the accident, heard a loud noise, and came running to the scene. However, deputies found the excavator’s shovel in the base of the downed tree. In other words, the park’s owner downed the tree when someone was on the trail, causing the tree to go down, strike the doctor on his motorcycle, and kill him instantly. In a panic, the park owner lied about what happened, but could not secure the scene in time to destroy evidence.

A jury found that the park owner and related entities were responsible for the accident and pinned them with a $22 million verdict. The $22 million jury award reflects the lost wages that the doctor would have earned had he not been killed. You definitely do not want to be sued by the family of a doctor for wrongful death.

Well, the park is not insured, so there is no insurance policy that will quickly handle the matter. Instead, a judgment is placed against the company. It becomes the equivalent of a debt with the plaintiffs becoming the equivalent of creditors holding a $22 million judgment over the heads of the defendant company.

The defendant company has some options. Their first option is to declare bankruptcy. If they declare Chapter 11, they will still have to pay most (if not all) of the judgment, but they can organize the debt in a manageable way. In other words, it can be paid incrementally over several years. If the company declares Chapter 7, then the business would be liquidated to recover the debt or they could become the proud owners of a deadly park.

If the company does not declare bankruptcy, then the plaintiffs would sue the company again, this time as a creditor attempting to recover an unpaid debt. The court would impose the judgment against the park allowing the plaintiffs to garnish profits over the course of several years.

Either way, the company that caused this death is not in a good place, but neither is the family that lost their loved one.

The Miami personal injury attorneys at the office of Alan Goldfarb, P.A. file lawsuits on behalf of those who have lost loved ones to acts of negligence. Call today to set up a free consultation and we can begin discussing your options immediately.