What Happens In Florida When An Uninsured Driver Causes An Accident? 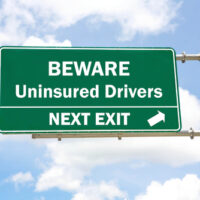 This happens more frequently than it should. An unsuspecting motorist is involved in a car accident caused by another driver that does not have insurance. While Florida has stiff penalties for driving uninsured, that doesn’t prevent some motorists from allowing their coverage to lapse. According to reports issued by the Florida Insurance Council, Florida has among the highest rate of uninsured motorists anywhere in the US.

So it often happens that those driving without insurance cause accidents. Without liability insurance, who pays for damage caused to your vehicle, yourself, and your passengers?

In order to legally drive in the state of Florida, a driver must have car insurance. Those that don’t are not only subject to the civil damages of paying for the damage to your car and medical injuries, they are also subject to legal ramifications of driving without insurance coverage. They can have their license revoked or suspended.

In addition, Florida requires all drivers to carry a minimum full liability policy that includes the following:

Collecting from Drivers that do not Have Car Insurance

Since Florida is a no-fault state, the majority of an accident claim will be paid out by your car insurance agency. Insurance companies generally cover around 80% of your personal injury expenses. This includes medical bills and other expenses related to your injury.

Suing to Recover Damages on an Uninsured Driver in Florida

In certain instances, suing to recover damages from a car accident can be a valuable option for a driver who is injured by another driver and has significant medical expenses as a result. Furthermore, an uninsured motorist has no protection from a tort case in which they are named as a defendant.

One issue that those suing to recover damages often face is that the uninsured party is not in a financial position to pay back the damages they caused. In this case, a payment schedule can be negotiated that does not put the defendant in a position of financial hardship.

The Defendant is Considered a Debtor in Florida

If the defendant is non-compliant in repaying the settlement, there are a number of ways an individual can collect on a claim. These include:

You may also attempt to suspend the uninsured motorist’s license until the settlement is paid in full.

In other words, you don’t simply have to eat the bill when an uninsured motorist causes you physical harm that results in unpaid medical expenses and loss of work. You are entitled to compensation. If you have unpaid medical expenses caused by an uninsured driver, call an attorney at the office of Alan Goldfarb, P.A. in Miami at 305-371-3111, and we’ll get you the settlement you deserve.