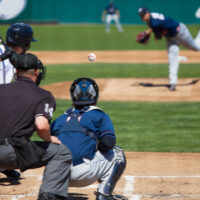 Dartmouth pitcher, Colton French, filed a lawsuit against the school after he was seriously injured at practice. According to the lawsuit, it was the first time French ever pitched using the L-shaped net. The net is designed to protect pitchers from hits and is generally used during batting practice. The pitcher lobs a floater to the batter so that the batter can perfect his swing. The net prevents line drives toward the pitcher’s head and body.

According to the lawsuit, French threw a pitch but did not keep his head behind the screen. The result was a devastating line drive that struck the pitcher in the face. According to the lawsuit, French’s left eye socket was crushed causing him to lose vision in that eye. He also required multiple surgeries to repair the damage at an estimated cost of over $400,000. He missed the rest of the school year and said that he could no longer play baseball or other sports and will never be able to work in a profession that requires full depth perception, peripheral vision, or the ability to discern small details.

The “Increase of Risk” Defense

The defendants in the lawsuit claimed that being hit by a pitch is an intrinsic risk of the game of baseball and that the defendant did nothing to increase that risk. However, the plaintiffs argued that the defendant was negligent because the practice took place in a poorly-lit indoor facility. The plaintiffs further alleged that the net used by the school was very old and inappropriate for college-level use. Further, coaches for the team failed to properly instruct French on the proper use of the screen prior to pitching batting practice.

Further creating problems for Dartmouth were allegations that the school discarded the screen after the incident and then destroyed videotape of the practice.

The lawsuit was settled for an undisclosed amount of money and the matter is considered resolved by all parties.

Dartmouth was correct to argue that baseball has intrinsic risks associated with it. However, the fact that the replaced the net and then destroyed evidence of the practice belies the notion that they did not contribute risk. In this case, the plaintiff was successfully able to argue that they did contribute risk based on both the destruction of evidence and the facts involved in the case.

Here, the question of whether or not the net was suitable to college-level use is probably the most important single piece of evidence that the plaintiffs presented. However, even that may not have been convincing enough had Dartmouth not gone and replaced the net after the accident occurred.

If you’ve been injured and another party contributed negligence to your injury, the Miami personal injury attorneys at the office of Alan Goldfarb, P.A. can help you recover damages related to the injury. Our attorneys have successfully recovered millions in damages for our clients. Talk to us today for a free consultation.