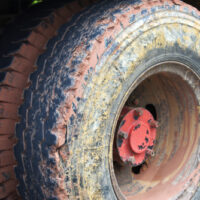 A jury ordered Hankook Tire Co. Ltd to pay nearly $38 million in a product liability suit to a man for an accident that occurred involving his front tire. The plaintiff in this case was driving a cement truck when one of the front tires blew out causing the vehicle to capsize. As a result of the accident, the plaintiff was left without the use of either his arms or his legs.

In a case such as this, the difficulty for the plaintiff’s attorney is proving that the cause of the accident was a defect in the tire. The plaintiff must be able to prove product defect by a preponderance of the evidence, meaning that a tire defect is the most likely explanation for why the accident occurred.

It’s not an easy task in a case such as this to prove that defendant was negligent and that a defect in the tire is what caused the accident. The problem, of course, is that there are a number of reasonable explanations for why an accident like this can occur. Those can include defects in the road, defects in installation, a problem with the truck itself, or debris on the road causing the tire’s failure.

In a case like this, the defense’s job is to complicate the issue while the plaintiff’s attorney tries to simplify it. In this instance, the plaintiff’s lawyer called in the help of an outside firm that had experience and expertise in cases involving defective tires.

The plaintiff’s attorneys were able to produce an expert witness that argued that Hankook’s tire was an “accident waiting to happen.” He further concluded that the main problem with the tire was manufacturing defects that resulted in incomplete adhesion. He said that this resulted in the tire being “too thin” and that was a result of a manufacturing defect. The tire itself provided evidence that it had not been fully vulcanized.

Hankook had won a very similar case beforehand that involved a capsized truck. The major issue that attorneys on both sides face is convincing a jury one way or the other concerning tire forensics. Since jurors are unlikely to have much knowledge concerning tire engineering, the battle in the courtroom becomes more or less a confidence game. Whose story is more believable?

In a product liability case such as this, simply showing that the product did not meet its express intent is enough to prove that the company that manufactured the product is responsible for the injury. But expecting jurors to understand the ins and outs of tire forensics is asking quite a lot.

Given the severity of the plaintiff’s injuries and the fact that he is a sympathetic plaintiff can go a long way, even when the merits of a case cannot be fully understood by the jury.

Let Us Help You Today

If you have been injured as a result of someone else’s negligence in Miami, we can help you. Don’t hesitate to contact the attorneys at the office of Alan Goldfarb, P.A. for assistance with your case.