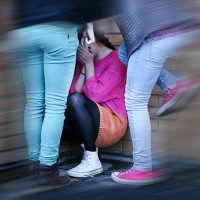 A family claims that their daughter was harassed so badly at school that she took her own life. They further claim that the school district did not follow its own policies against school bullying. While the student reported many of the worst abusers, no student was ever disciplined for taunting or harassing the girl.

The girl, who was 12 at the time of her suicide, suffered from a condition that rendered her bald. The other children would make fun of her and call her “Mr. Clean” and other names. They would pull her wig off her head and at one point, another student pushed her out of her chair and began choking her. The school did little or nothing to stop the bullying which was based on a disability. The parents claim this violates Title IX of the Civil Rights Act (The Americans with Disabilities Act) because a child cannot learn in a hostile work environment. The family claims she was targeted because of her disability and her sexual orientation.

Analyzing the claims in the suit

As you can probably tell, this is a complicated lawsuit. It can be difficult to hold another party accountable for a suicide, but in this case, the suicide is directly connected to the harassment the girl faced at school because of her condition. Eventually, it became too much for her to bear, and she took her own life. Now, the parents are grief-stricken and enraged that their daughter’s needs were not taken seriously by the school. They are further upset that the school apparently did not punish any of the students who contributed to her suicide.

While bullying lawsuits are generally not winnable when it comes to two members of the public, it’s a totally different story in a workplace environment or a school environment. The school, just like an employer, would have a duty of care to ensure that each child has equal access to education. If their school environment is hostile, then the law considers that a deprivation of education. Administrators and teachers would have had a duty of care to ensure that the child had access to education in a safe environment. So, they violated the child’s civil rights by failing to act.

Now, there’s a second question as to whether or not the government can be held liable for negligence in a matter like this. Typically, a government agency or employee cannot be held liable for what they did not do unless there is a specifically delineated duty of care. In this case, there is. The school had the burden of ensuring that the school environment was free of disability bullying. They allowed a hostile environment to emerge around the girl and it ultimately resulted in her taking her own life.

The Miami personal injury lawyers at the office of Alan Goldfarb, P.A. represent the interests of those who have suffered injury due to the negligence of another party. Call today to schedule a free consultation and learn more about how we can help.