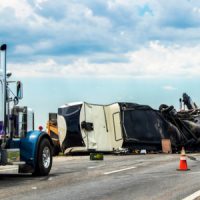 Two semi-truck drivers and five children were killed in a deadly wreck on I-75. The accident occurred on January third and now, eight lawsuits have thus far been filed by the grieving families of the children who were killed in the crash and living survivors who sustained serious life-altering injuries. All of these lawsuits have been filed in Cook County, Illinois against Eagle Express Lines. Although the crash took place in Florida, Eagle Express is based in Illinois.

Problematically for Eagle Express, one of the drivers involved in the crash, Steve Holland, had a history of unsafe driving violations on his record. The charges included speeding, careless driving, using an improper license plate, and driving an unsafe vehicle.

According to the Florida Highway Patrol, Steve Holland’s semi bumped into a Honda which sent both vehicles over the median and into oncoming traffic. Another truck and a passenger van struck the vehicles head-on. The passenger van was holding several children, five of whom died in the accident. Both semi-truck drivers died.

While FHP and the National Transportation Safety Board (NTSB) are still conducting investigations as to what caused the accident and what could have been done differently to prevent the accident, attorneys for the families maintain that it was Holland that initiated the contact with the Honda and this directly led to the vehicles ending up on the wrong side of the road. However, we don’t have enough information yet to determine whether the driver was negligent for the accident.

It could also be that the Honda driver stopped abruptly or otherwise did something unsafe in traffic. If that turns out to be the case, then even the fact that Holland had a history of unsafe driving won’t help the plaintiffs in court.

If Holland is responsible for the accident, then not only will the trucking company take liability for their driver, but they can also be sued directly for negligent hiring and negligent entrustment. This is a much stronger cause of action than a claim filed against a driver on a theory of vicarious liability.

While it’s true that companies are responsible for the conduct of their employees while they’re engaged in their work, direct negligence claims against the company go above and beyond commercial driving liability insurance claims. They are claims that are filed directly against the company and they are paid directly from the company’s coffers unless they have a separate policy.

This is very bad for the company but worse still for the families that lost children in the accident.

When a trucking company employs a driver with a history of driving recklessly, they can be held accountable for putting the public at risk. If you’ve been involved in an accident involving a commercial truck, contact the Miami personal injury attorneys at the office of Alan Goldfarb, P.A. for a free consultation and to learn more about how we can help.