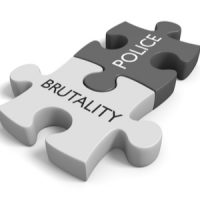 Francois Alexandre has filed a lawsuit against Miami police officers who beat him up and injured him after the final game of the Miami Heat championship in 2013. Alexandre alleges that police slammed him to the ground fracturing his eye socket outside of his apartment in downtown Miami.

Alexandre was a 27-year-old college student at the time. He was celebrating with other fans away from the arena when police forced the celebrators off of the street. Alexandre moved onto the sidewalk thinking that’s what the police meant. But police kept pushing the crown pack and telling them to move.

Alexandre began recording the incident and informed police that he was a taxpayer and within his legal rights to be where he was. He then claims that a police officer placed him a chokehold, threw him up against a wall, and several other police officers joined in to beat them. Officers can be heard mocking him from his still-recording phone.

Since then, one of the officers involved in the beating has been promoted to Captain while two others face charges for excessive force. Alexandre has waited seven years for his day in court. When there are criminal charges filed against individuals involved in a civil lawsuit, the criminal charges take precedence over the civil charges. That means that the civil case has to wait until the criminal case has been completed.

There are also a number of factors hindering Alexandre’s quest for justice. For one, qualified immunity shields officers from civil lawsuits in all but the most extreme of cases. Second, these lawsuits can be very difficult to win.

In one case, a Florida jury awarded the plaintiffs in another police brutality lawsuit only $4 claiming that the man was 99% responsible for his own death. The man was fatally shot in his own garage after his neighbors called the police on him for playing loud music. Attorneys called the judgment punitive and said that the jury wanted to punish the plaintiffs for having the audacity to sue police officers who took their loved one’s life. The judgment was later reduced to $0 because of a Florida rule involving comparative negligence.

In Florida, we operate on a pure comparative negligence system. That means that even if someone is 99% at fault, they can still recover damages reduced by 99%. However, there is a second rule that states that if someone is drunk at the time of an accident and determined to be more than 50% at fault, then their damages are reduced to zero.

In other words, the $4 jury award was symbolic and meant to send a message to the family, a very nasty one at that.

Even when lawsuits are successful, there are caps on the total damages. In this case, Alexandre would be entitled to a $200,000 maximum award if a jury sides with him.

If you’ve been injured due to the negligence or malice of another person, you are entitled to sue to recover damages related to medical expenses, pain and suffering, and lost wages. Call the Miami personal injury attorneys at the office of Alan Goldfarb, P.A. today to schedule a free consultation.