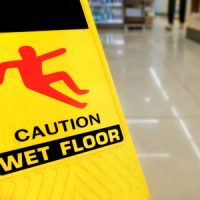 Carlos Caamano slipped and fell in a puddle that had collected in the dairy aisle at a Homestead supermarket in 2017. Caamano, who is a 29-year-old deliveryman, claimed that he had undergone a spinal decompression surgery addressing injuries to his neck and shoulder. He says that he suffers from ongoing pain that restricts his range of motion and that will worsen over time.

In response to the allegations, the defense said that Caamano was texting on his phone when the slip and fall happened. In other words, his attention was distracted from what he was doing and that led to the slip and fall accident.

The jury awarded Caamano $319,120 in total damages, but also ruled that Caamano was 25% responsible for the accident because his attention was divided between walking and looking at his phone.

This is a very common defense to a slip and fall accident claim. The defense may not be able to absolve themselves of liability completely. After all, they allowed a dangerous condition to persist even as it represented a threat to potential customers. Caamano walks into the puddle, slips, and injures himself.

The jury ruled that the supermarket was 75% responsible for the accident because they allowed the dangerous condition to continue without cleaning it, placing up signs, or other hazard warnings that could have prevented injury. Caamano was held 25% liable because he was looking at his phone while he was walking around the supermarket.

How Slip and Fall Accidents are Litigated

In this case, Caamano says he suffers from ongoing pain that his doctors have told them will get worse with age. That’s an injury that will affect him for the rest of his life, may restrict what kind of work he’s able to perform, and may limit what kind of sports and leisure activities that he engages in. In other words, this injury has reduced his overall quality of life for the rest of his life.

He may also require future surgeries to repair the damage to the discs in his neck. So, while a $240,000 jury award may seem high, the trade-off is more than most people would be willing to pay.

If you were injured in a slip and fall accident in a public place, call the Miami personal injury attorneys at the office of Alan Goldfarb, P.A. today to schedule a free consultation and learn more about how we can help.

More on Slip and Fall