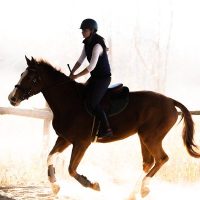 A lawsuit has been filed against three entities after a 4-year-old girl sustained a traumatic brain injury when a horse fell on top of her. The girl is now permanently deaf as a result of the injury. Among the named defendants are the horse’s rider, a school that provided the grounds for the event, and the organizer of the event.

The plaintiffs allege that during the competition, the horse came within a short distance of the child. The rider failed to maintain control of the horse, causing the horse to capsize and fall onto the girl. The child suffered a fractured skull, permanent deafness in one ear, facial nerve paralysis, a lung contusion, and traumatic brain injury. Their damages are estimated at somewhere between $800,000 and $1 million.

In a case like this, the main squabble between the parties is not over who was responsible for the accident, but the extent of the plaintiff’s damages. In a case like this, it becomes very difficult for the defense to build any reputable counter-arguments to the charges. The rider should have been able to control the horse properly and their failure to do so resulted in permanent injury. Nonetheless, the matter hangs in limbo as the plaintiff fights for the maximum recovery.

Why? Well, essentially, the girl has suffered a permanent disability: Deafness. This deafness will make it more difficult for her to engage in social activities and learn in a classroom environment. She will thus need special education services to move forward. While her doctors say she is recovering from the cognitive problems she faced in the wake of the accident, there are still psychological factors at play. Plus, the girl will never have the use of one of her ears again.

The five masks of the liar

The Miami personal injury attorneys at the office of Alan Goldfarb, P.A. represents the interests of those who have been injured due to the negligence of another party. Call today to schedule a free consultation and we can begin discussing how much you’re owed for your injuries.