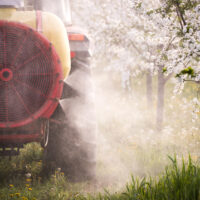 When the children of the Acreage in Florida, just outside of West Palm Beach, began getting ill from a confounding set of symptoms, parents weren’t sure what was happening. Their children suddenly began experiencing frequent headaches and a loss of energy. Nausea and vertigo were common. In some instances, their behavior became aberrant and frightening punctuated by occasional fits of hysterical laughter. In the years before medical science produced corporeal explanations for events such as these, medieval parents may have suspected a demonic presence was the cause.

As it turns out, their children were suffering from brain cancer. But it took years for them to understand the extent of what was happening. One mother, Jennifer Dunsford, began to recognize a pattern. The children of the Acreage, Florida had a far higher rate of developing brain tumors than seemed natural. She decided to put together a database to track the dozens of cases that were happening in her neighborhood.

Linking the Cancer to Environmental Toxins

The Acreage in Florida is not your typical suburb. Many of the families that live there were drawn to the area because it had not been developed. The majority of properties themselves are over an acre in size, and the area relies on private wells and other privately run and owned businesses for basic services. The town is not incorporated.

In other words, the majority of those who lived in the area were drawn there by the love of the natural environment. Dunsford, alongside other area parents, began setting meetings for those who had been affected by the cancer outbreak. A local reporter ran a story on her efforts. Eventually, the state of Florida vowed to undertake a cancer-cluster investigation.

But linking the high rate of pediatric brain tumors to a single cause is not an easy task. The folks of the Acreage learned also that they were not alone. Residents of Port St. Lucie had also suffered an unexplained outbreak of brain tumors.

Investigations, however, failed to turn up conclusive evidence. There were higher levels of potential carcinogens in the private well water, but the news appeared generally good. A sharp divide formed in the community between those who wanted to believe the good news, and those who still thought there was an environmental cause.

The difficulty in a case like this is establishing the connection between a single environmental toxin and the higher rate of cancer in a given area. It becomes, in most instances, one possibility among many. At best, environmental scientists and researchers are able to show a correlation. For a lawyer, establishing liability is extremely difficult, though not impossible.

For residents of the Acreage, there was one kind of contamination that had the potential to explain the higher rates of brain cancer. That was ionizing radiation. The source of the ionizing radiation could be traced to two companies that operated in the area. One of these companies was a mining operation that used a method of dredging to mine limestone for road construction. The other was Pratt & Whitney, one of the largest manufacturers of airplane engines in the world.

For personal injury lawyers, this represents an instance of what is called toxic tort. The challenge for attorneys is in connecting the higher incidences of brain cancer to the waste products of these companies. If successful, however, the lawsuits may result in some compensatory damages for the families that were destroyed by this tragedy.

Have You Been the Victim of Environmental Toxins?

If so, you deserve an attorney that will do everything in their power to bring the truth to light. Contact the office of Alan Goldfarb, P.A. today for immediate help with your case.