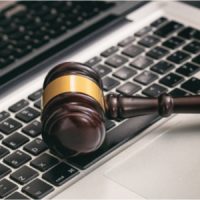 Jacksonville will hold Florida’s first-ever completely virtual trial. That means that every element of the case will be heard by jurors from the comfort of their own living rooms. Jurors will, of course, still be required to pay attention to the proceedings. Duval County in Jacksonville was selected by the Florida Supreme Court to act as a test-run for virtual trials.

Jacksonville was selected because they have been running several mock trials using the virtual format and appeared best prepared to deal with the peculiarities of a virtual trial.

So, What’s the Lawsuit About?

A Jacksonville exotic dancer is suing the gentlemen’s club that she worked for after she says two of the strip club’s bouncers severely beat her, leaving her with injuries to her face and teeth.

This is a civil case that will require six jurors and two alternates. Thus far, no efforts have been made to try any criminal cases in this format. Prosecutors and judges are likely afraid that the format would leave the trial open to appeal.

Will the Plaintiff Win?

It’s hard to say without knowing all of the facts. In this instance, the most interesting thing about the case is the novelty of the format.

In this instance, you have two employees of a gentleman’s club assaulting a coworker. At least, that’s what the plaintiff is claiming. The defendants will likely either say that the men who beat her were not employees of the club, or alternatively, they were attempting to prevent her from either attacking another dancer, a customer, or stealing money.

If they choose to move forward with the latter argument (they were preventing her from committing some other crime) then they will have to explain why two men were required to subdue a single stripper. They will also have to explain why they didn’t allow the police to handle the situation. Then, a jury will be forced to decide who was ultimately responsible for the stripper’s injuries. If the stripper was out of control or attempting theft, the jury could assign some of the blame for the incident on her. Likely, however, they will still say that the men who beat her were partly liable for her injuries.

The Right to Intervene With Violence

In Florida, we allow citizens the right to intervene violently when they feel that their own lives are in danger, or someone else is in danger. In some cases, protection of property can be used as a justification for initiating violence. However, once the violence is initiated and the situation has been brought under control, the individuals would have no right to commit more violence.

The right of violence is directly tied to the individual’s belief that they are being threatened. They are allowed to do only enough to neutralize the threat and nothing more. While we don’t know the specifics, it seems likely that the bouncers did more than what was necessary to subdue the stripper.

If you’ve been injured due to the negligence or malice of another person, call the Miami personal injury attorneys at the office of Alan Goldfarb, P.A. today to schedule a free consultation and learn more about how we can help.