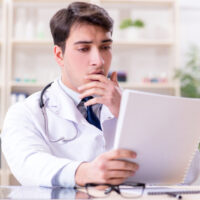 A grieving husband landed a $30 million verdict after his wife died due to complications related to ankle surgery. The lawsuit was filed against Baptist Health Medical Group Orthopedics and two of their doctors.

Alfredo Victor Fernandez and his wife went to the orthopedics center after his wife suffered an ankle injury. The plaintiffs successfully argued that the doctors had the right plan in place to treat Mrs. Fernandez, but several lapses led to her not getting the right treatment. The treatment involved specific medication to prevent the formation of clots after surgery. The attending doctor never followed through on the treatment plan, and Mrs. Fernandez was never given the medication she needed to prevent the clots. Eventually, she died because she was not given the clot-preventing medication.

Two doctors, an orthopedics group, and a nursing home were all listed as codefendants in the lawsuit. The entire lawsuit revolved around the failure of any doctor in whose care she was entrusted to ensure she was on the anti-clot medication. At every step of the way, some doctor failed to give her the medication that would have saved her life. So, all of these doctors were liable, but some were more liable than others.

Her attending physician, Jordan, knew that Mrs. Fernandez was at risk of developing deep vein thrombosis. He ordered blood pressure and blood-thinning medication to prevent clots from forming. He ordered anticoagulants to be administered for the next 21 days. She is then transferred to a nursing home, where the anticoagulants are never administered.

95% of the blame went to the doctor who attended to her at the rehab facility. Despite the fact that the patient was running a fever and her condition seemed to be worsening, a second doctor, Dr. Cruz, was allotted the majority of the liability in this case. Eventually, she developed severe breathing problems and pneumonia. An autopsy revealed that she had developed a pulmonary embolism.

A lawsuit against the nursing home is still pending.

Medical malpractice lawsuits are extremely complicated. When a patient like Mrs. Fernandez dies due to an obvious medical error like this one, the surviving family members can file a medical malpractice/wrongful death lawsuit against the doctor, the hospital they work for, and others involved in the incident. In this case, establishing that there was an actionable quality of care issue was not difficult. The patient needed medication that she never got.

If you’ve been injured due to the negligence of a medical doctor or lost someone you loved due to medical negligence, call the Miami medical malpractice attorneys at the office of Alan Goldfarb, P.A. today to schedule a free consultation and discuss your options.