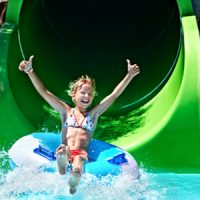 A Miami jury sided with the City of Miami in a lawsuit filed by the parents of a girl who was injured at the Grapeland Water Park. The girl was 11 years old in 2015 when the accident occurred. She ended up colliding with a boy at the bottom of the slide and damaging two of her teeth. The parents alleged that the water slide was not being watched closely enough and the lifeguard should have told the boy to move from the bottom of the slide.

The defense responded that the lifeguard was responsible not only for the slide but also for a wading pool and was thus not able to stay in one place. They alleged that the parents should have been watching the boy and ensured that he was not at the bottom of the slide where he could injure himself or someone else.

You must also prove that the defendant owed you a duty of care. In this case, the city employed a lifeguard whose job it was to watch both a wading pool and a water slide. It is established by statute that a property owner has a legal responsibility to remove or mitigate dangerous conditions on their property. In this case, the dangerous condition was someone else’s child at the mouth of a water slide. The plaintiffs were not firmly able to establish that the lifeguard owed the plaintiffs a specific duty to prevent this type of accident.

The plaintiffs could have amended their complaint to argue that the city didn’t staff enough lifeguards to ensure the safe operation of their attractions. But it’s still unclear that a jury would have sided with the plaintiffs in this case.

Most likely, what happened in this case was that the jury rejected the plaintiff’s request that damages be awarded. The girl’s injuries included two chipped teeth which required a trip to the dentist to fix. The plaintiffs were likely seeking damages for pain and suffering as well, which may have put the jury off on awarding any damages at all. While juries can help plaintiffs with whom they empathize and relate, they can also hurt plaintiffs who they believe are only out to take money for something that wasn’t really a huge deal. In this case, it sounds like the jury may have been responding to the request for damages and not the facts of the case.

The Miami personal injury attorneys at the office of Alan Goldfarb, P.A. represents those injured due to the negligence of another individual or company. We recover damages for lost wages, medical expenses, and pain and suffering damages. Call today to schedule a free consultation and learn how we can help.