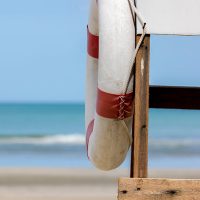 A lifeguard company that was contracted by Myrtle Beach to provide lifeguarding services in exchange for being allowed to rent beach equipment was sued for failing to render aid to a woman who drowned. The family said that there were no lifeguards present when the woman was in trouble. They sued the company and secured a $20.7 million judgment.

Several warnings were issued by lifeguarding agencies about the arrangement between the city and the company with concerned members of the public pointing out that the company had little incentive to prioritize public safety over beach rental income. Nonetheless, their contract with the city spelled out the terms of the agreement. They were only allowed to turn a profit on the sales and rental of beach equipment because they were providing lifeguarding services free of charge. The obvious and inevitable happened with the lifeguards prioritizing sales over public safety and hence, they were sued by a family who lost a loved one during a high rip current event.

After losing the lawsuit to the tune of $20.7 million, the lifeguarding company is now appealing the decision on the basis that its contract with the city extends sovereign immunity to city contractors.

Do contractors get sovereign immunity?

There are precious few situations in which a government contractor would be entitled to sovereign immunity under a state’s laws. One of the few exceptions is doctors working at teaching hospitals. However, this immunity almost never extends to companies that bid on contracts with a city to provide services on the city’s behalf. Even if the city signed a contract extending sovereign immunity to the company, they would simply be taking on the liability themselves because it would deprive the plaintiffs of their ability to recover damages. So, in other words, if the city were to extend sovereign immunity to contractors, it would be taking on liability itself. Sovereign immunity generally caps damages at somewhere between $200,000 and $300,000 depending on your state. The city can “insure” contractors but they cannot force the law to extend itself to non-governmental organizations. That’s because sovereign immunity is meant to protect taxpayers and not companies.

Lastly, the company argued that the jury was impassioned by irrelevant parcels of information such as the lifeguarding company was not certified by U.S. Lifeguarding Association which was displeased with the arrangement and sent a letter that it was placing the public in danger. Attorneys for the defendants claim that this information was irrelevant since the city does not require certification by the USLA to provide lifeguarding services.

It sounds as if the verdict will be upheld.

The Miami personal injury lawyers at the office of Alan Goldfarb, P.A. represents the interests of those who have been injured in accidents involving negligent defendants. Call today to schedule a free consultation and we can begin preparing your case immediately.