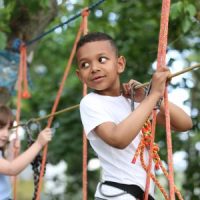 A New York woman has filed a personal injury lawsuit against a Maine summer camp where she said she sustained permanent injuries due to counselor negligence. The woman, now 21, was 14 when the accident occurred.

In a typical personal injury lawsuit, you have 2 or 3 years to file before the statute of limitations run out and you’re out of luck. However, those who are under the age of 18 require a guardian ad litem to represent their interests in court. That would mean that the parents would have to file the lawsuit on the daughter’s behalf. In this case, they never did. Because the girl was 14 when the accident occurred, the statute of limitations would be tolled until her 18th birthday. In other words, the clock would only start ticking down once she turned 18. Hence, she was able to file a personal injury lawsuit 7 years after the incident occurred.

The lawsuit alleges that the girl was one of several children on an overcrowded platform within a rope course. At some point, the girl either fell off the platform or was pushed off by a fellow camper, hit her head, and sustained a traumatic brain injury. The plaintiff alleges that the counselors were not adequately ensuring the safety of the children and that too many children were on the platform at the same time. She is seeking $10 million in damages, which is a very large figure.

An attorney representing the defendant made several contrary statements to the camper’s story. He also said that no injury was witnessed by any of the counselors that day, and that the girl, who was 14 at the time, is at least partly responsible for her own injuries. He further stated that the counselors were not negligent and they were well-trained at the time. He further stated that there was no tree stump in range of the ropes on which the girl could hit her head.

In response, the plaintiffs will present medical evidence that the fall did occur. The fact that no fall was reported that day will then appear to be more negligence by the counselors. Whether or not a 14-year-old girl can be held comparatively liable for injuries sustained while she was under the care of guardians is tricky. If the girl was misbehaving or acting dangerously, then the camp’s negligence is called into question. If the camp is not negligent, then the camp wins. However, the fact of the injury, the fact that it was never recorded, and the fact that the girl sustained permanent quality of life issues from the injury will damage the defendant’s case.

If your child is injured at camp, school, or any organized activity under adult supervision, you should not wait to file a lawsuit until they are 18, but do so immediately so that the incident is fresh in everyone’s mind. The Miami personal injury attorneys at the office of Alan Goldfarb, P.A. can help you throughout this process. Call today to learn more.