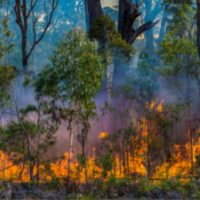 A woman has filed a lawsuit against the federal government after a “prescribed burn” caused a major accident on the roadway. Prescribed burns or controlled fires are those that humans set themselves to remove brush that could cause uncontrolled fires. In this case, the woman says that the government negligently burned the foliage resulting in near-zero visibility and resulting in a multi-car pileup on a stretch of highway.

When the plaintiff came upon the smoke, she slowed her car down considerably. She was not, however, the only person to take such defensive action. Her 1999 Buick Century collided with an already-stopped GMC Terrain.

After the accident occurred, the woman exited her vehicle and attempted to speak with the driver of the GMC Terrain to see if they were okay. The woman alerted police to the incident and attempted to walk to the Terrain. At that point, one of her own passengers yelled out a warning. That’s when a third vehicle entered the fray. The plaintiff was struck by this vehicle, which also could not tell there was a pile-up in front of them and was “sent flying” according to the complaint. When her passengers went to search for the woman, they found her lying 20 feet away.

In this case, the woman’s injury was not caused by the accident itself but a secondary accident that resulted from the first. According to the complaint, she required emergency surgery to save her life and was then transported to a neurological center due to traumatic brain injury. As a result of the accident, the woman suffered cognitive impairments, a temporal bone fracture, and paralysis to the right side of her face. Since her injuries are permanent, her settlement should be for the maximum possible award permitted by the federal government in tort claims against it.

This isn’t a difficult case to prove. The government owes a duty of care to drivers on the road to ensure that activities they conduct don’t cause injury. In this case, they failed in that duty of care. A controlled fire that they created made visibility low resulting in a multi-car accident. One woman was seriously injured in that accident. While the defense will likely argue that the woman should have stayed in her car, the smoke and ensuing pile-up are all the government’s fault.

The federal government is liable when the conduct of one of their employees, in the execution of their duties, causes injury to others. The plaintiff must prove that the government employee was negligent. In this case, it shouldn’t be very difficult.

If you’ve been injured due to the negligence of another person, company, or even a government agency, you are entitled to file a lawsuit against them to recover damages related to your injuries. Call the Miami personal injury attorneys at the office of Alan Goldfarb, P.A. today to schedule a free consultation and discuss your situation in more detail.

By Alan Goldfarb, P.A. | Posted on January 13, 2021
« South Carolina Nursing Home Lawsuit Looks to be First of Many
Migrant Workers Allege That They Were Sprayed by Pesticides »