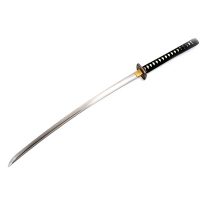 These are becoming a lot more common. Either the family or an individual who is having a mental health episode calls the police. Police enter the fray and then kill the individual they are supposed to be helping. The family then files a lawsuit. It is a sad story with a similar refrain. However, outcomes in wrongful death lawsuits are extremely inconsistent and rely heavily on social pressure. Further, police are seldom held accountable criminally for these incidents.

Part of the problem is their training. In this case, the descendant was wielding a “decorative samurai sword” which was held down with the tip an inch from the ground. The officers demanded that the man drop the sword. He didn’t, so they opened fire.

It is typical for officers to be trained to issue one command to an individual and if they do not comply, then they are authorized to fire. In the case of a gun, that makes a lot of sense. In the case of a sword or a knife, the true litmus on whether or not lethal force would be necessary is distance. If the officer had his sidearm pulled and pointed at the individual, knowing it was a mental health call, he may have handled the situation more delicately.

Now, the officers and the county are being sued by the family of the man who was shot. The County is still investigating the shooting.

Who is really being held liable here?

When an officer is instructed to fire on a suspect who does not comply with a command to drop a weapon, we don’t blame the officer, we blame the instruction. In this case, officers are not being employed properly. Dealing with a mental health emergency is not the same as dealing with a hostage situation or a stand-off. You can’t readily predict what the suspect wants or what they are going to do. In a hostage situation, you know the suspect wants to get away. In a stand-off, they’re looking to get away. A mental health suspect may not understand the instructions being issued or interpret the situation in a completely inappropriate way. While there is plenty of risk in dealing with someone who is having a mental health issue, police are being trained to interpret a failure to comply with instructions as lethal intent.

Hence, because the department has a policy, the officers themselves cannot be held accountable. It would be incumbent upon the department itself to issue policy changes that would prevent such tragedies in the future. One idea that is being floated around involves the use of mental health counselors to handle mental health calls as the first line of defense. In these cases, the individuals would be trained to deal with those in crisis and resolve the situation in a manner that did not result in a needless death.

If you or a loved one has been injured or killed by negligent policing, call the Miami personal injury attorneys at the office of Alan Goldfarb, P.A. today to schedule a free consultation and learn more about how we can help.