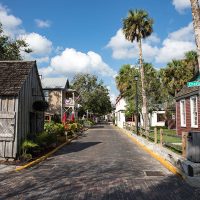 A trolley driver is facing charges of reckless driving with bodily injury and reckless driving with property damage as lawsuits pile up related to a trolley crash that injured 12 passengers. According to the lawsuit, the trolley driver was turning into a parking lot when he floored the accelerator causing the third trolley car to roll over. Some of the passengers were pinned between the capsized trolley car and the road. However, that didn’t stop the trolley driver from continuing forward even with the third car on its side. The people in the second car attempted to help the passengers in the third car who were trapped beneath the trolley.

According to the passengers, the trolley driver advised passengers to “hold onto their hats” just before the trolley capsized. The lawsuit has been filed against the historic tour company that operated the trolley.

The trolley company is liable because they employed the driver who unsafely operated the trolley causing it to turn over. Once passengers had been ejected from the trolley, some still trapped beneath the car, the driver continued to attempt to drag the capsized car into the parking lot with people still inside and underneath it. It is unclear what was going through his head at the time of the accident, but he will be faulted for operating the vehicle unsafely, recklessly, and causing injury. A charge of reckless driving may be appropriate in this case.

Since the employee committed 100% of the negligence, his employer is 100% responsible through a concept known as respondent superior. In English, it simply means that an employer is vicariously liable for the conduct of any employee when they are fulfilling their duties on the job. It is one of the caveats of corporate personhood that corporations have to live with.

A linked allegation could allege negligence directly against the trolley company for employing a driver who was either under skilled or was having some sort of issue at the time of the accident. Thus far, it is unclear what the specific nature of the allegations are, if the trolley driver had a history of unsafe driving and other matters they may imply that the company itself (and not just its driver) was negligent.

A lawsuit like this is very likely to succeed since the allegations against the driver are corroborated by criminal charges. The only thing that plaintiffs have to worry about there is that the criminal case could hold up the civil case. However, the trolley company is unlikely to want to take this matter before a jury, so they will try to settle quickly with the families.

If you are injured aboard a tour bus or other such transport, you are entitled to sue to recover damages related to your injuries. Call the Miami personal injury lawyers at the office of Alan Goldfarb, P.A. today to schedule a free consultation and we can begin discussing your options immediately.