Uber Sued After Man Is Left Quadriplegic In Auto Accident 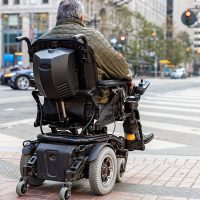 Uber has a serious problem after a passenger on his way home from work was left completely paralyzed in an auto accident. According to the lawsuit, the driver had a long history of moving violations and was speeding at the time of the accident. The passenger alleges that the driver swore, then swerved the car, and then struck another car. The passenger’s head went directly into the headrest and he sustained neck injuries as a result. This is why you should always use seatbelts even in the back seat of the vehicle. While Uber is still going to be liable for the crash, the fact that he was not wearing a seatbelt could impact his settlement award.

Lawyers representing the plaintiff say that the Uber driver had at least 20 citations on his record going back to 1996. At one point, he was required to undergo a driver retraining course that was mandated by the state. It is unclear what Uber’s standards are for hiring drivers, but in this case, those standards proved an utter failure. Uber made a dangerous driver into a professional driver.

The plaintiff, who was a chef, will no longer be able to work in his chosen profession and will require considerable support services from health care providers.

The driver is accused of driving recklessly and causing an accident. However, no citation was issued to the driver at the time of the accident. It is unclear whose fault the accident was. The passenger claims the driver was going at a high rate of speed at the time of the crash. The passenger also claims the driver was excited that there would be very little traffic and that would enable him to “fly around”. In other words, it appears that this driver was driving unsafely as a matter of course. If true, this would be much more damning than the driver’s history as the Uber app can record how fast drivers are going. That would mean that Uber had access to data indicating that the driver was speeding consistently to ensure that he got more fares.

Uber also has a duty of care to the public to vet drivers prior to allowing them to drive for the company. Drivers with protracted histories of moving violations should not be primary candidates for a livery service job. Nonetheless, this appears to be a situation in which Uber’s employee vetting processes did not work as advertised or they never existed in the first place.

The allegations against Uber are strong, however, there is no clear indication that the Uber driver caused the accident. So, that may be one potential avenue that Uber has to defend themselves from this lawsuit.

If you have been seriously injured in a car accident, you may be able to sue beyond the no-fault limits imposed by the state. Call the Miami personal injury lawyers at the office of Alan Goldfarb, P.A. today to schedule a free consultation and learn more about how we can help.