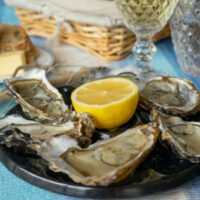 You and your spouse go to one of your favorite restaurants and order your usual. When you get home, the both of you come down with flu-like symptoms: stomach cramps, pain, nausea, diarrhea, vomiting, and fever. The wife’s symptoms clear up in a few days. The husband’s symptoms appear to persist for longer. By the time the husband’s food poisoning symptoms had passed, his immune system had begun attacking the myelin sheath that protects the nerves. A month later, the husband has difficulty supporting his own weight. The husband is diagnosed with Guillain-Barre Syndrome, a rare autoimmune condition brought upon by a serious infection. He now has permanent nerve damage.

Such was the case of a man and a woman who were served contaminated seafood at one of their favorite Tampa restaurants, Lobster Haven Seafood Market and Shanty.

In a case like this, several complications arise. Firstly, there were two illnesses caused to the man and the second illness is what caused the permanent nerve damage, extensive pain and suffering, and formed the backbone of the plaintiff’s lawsuit against the defendant.

The defense stipulated to the fact the food was contaminated and caused the flu-like symptoms that lasted a couple of days. However, the defense would not concede to the idea that the food poisoning had caused the onset of Guillain-Barre Syndrome.

It was clear from the evidence, however, that the contaminated seafood triggered the flu-like infection which triggered the Guillain-Barre Syndrome. The question was: could the defense be held liable?

Jurors don’t need to be doctors to understand the basics of a disorder or the chain of causation. Their job is to interpret the law in regards to responsibility. GBS is an extremely rare condition which has less than 20,000 reported cases in the U.S. every year. Furthermore, the cause of the condition is not well understood by medical science. This is partly because of how rarely the disease presents in patients.

GBR is considered an “acute” illness during which symptoms flare up and then disappear. Nonetheless, the consequences of GBR can last a lifetime. The disease is an autoimmune response caused by an acute infection in which one’s own immune system begins attacking the body’s nerves.

However, the condition can be triggered by a digestive tract infection.

Verdict in Favor of the Plaintiff

While the chances of a patient suffering from GBR due to tainted food is probably one in a million, the man’s symptoms would not have occurred had the defendants not served him tainted seafood.

On the other hand, the verdict could have easily gone the other way. For instance, let’s say someone slips and falls in a grocery store but suffers something improbable like a broken bone in their leg. If they had a pre-existing stress fracture, that may account for the extent of damage that was done by a defendant’s negligence thus reducing their culpability.

The Miami attorneys at the office of Alan Goldfarb, P.A. can help you get compensation for your injuries. Give us a call at 305-371-3111 or contact us online for a free consultation.