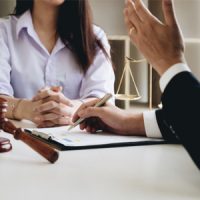 Say what you want about personal injury lawyers, but we don’t file lawsuits against the victims. An insurance company, however, has filed a lawsuit against the widow of an Uber driver who was killed by a drunk driver in a speeding Lamborghini. The lawsuit is an effort to recover $1 million in settlement money after their insured killed her husband.

Why is This Happening?

The insurer that is filing a lawsuit against the widow is the insurance company that represented Uber. According to their argument, the woman settled with the driver for an undisclosed amount of money. In their mind, this means that she should return $1 million she was paid by her husband’s employer’s insurer. Attorneys for Smith have characterized the lawsuit as “frivolous” and “ill-conceived” stating that there is no basis for forcing a beneficiary to return monies paid under the terms of the policy contract. Attorneys for Smith have asked the judge to impose financial sanctions against the company for moving forward with the lawsuit.

Indeed, insurance companies do like to test the waters when it comes to certain legal squabbles. In some cases, they deny valid claims to see if the courts will force them to honor the policy. In other cases, they test the litigation waters by filing lawsuits against grieving widows to return monies paid based on separate settlements.

The State of Florida is not a tort state when it comes to vehicle accidents. Instead, it operates on a system of no-fault liability. Those who are injured or die in vehicle accidents file claims on their own personal injury protection policy and recover monies paid by the insurance company. Additionally, Florida law permits individuals who have either sustained a “serious” personal injury to file a lawsuit against the other driver. In these cases, the other driver generally does not have a policy that indemnifies them from individual liability. But when the person who struck and killed you drives a Lamborghini, you know that they have assets that you can sue against.

In this case, the driver settled the suit under seal. This means that the settlement cannot be discussed by any of the interested parties.

Insurance companies do file lawsuits against individuals. Typically, however, it’s to recover money that they paid to a victim from the individual who caused the accident. In other words, you don’t sue the victim to recover that money, you sue the individual who caused the accident. That is exactly what the insurance company tried to do, but then they inexplicably added the victim’s name to the lawsuit. The company alleges that the victim never informed them of the settlement, but the victim maintains that the insurance company was a part of the settlement discussions that took place against the driver.

The Miami personal injury attorneys at the office of Alan Goldfarb, P.A. represent those injured in serious traffic accidents. Call our office today to learn more about how we can recover damages related to your medical expenses, lost wages, and reduced quality of life.