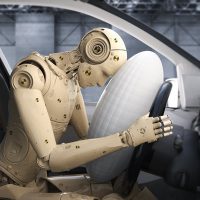 A woman who was involved in a minor accident alleges that she suffered major injuries after her Subaru Outback’s airbag deployed too forcefully causing spine and neck injuries. Subaru tried to defeat the claim in summary dismissal, but a judge ruled that the plaintiff’s pleadings were strong enough to warrant a trial. The case will now proceed to a jury. With a jury and trial date hanging over the heads of the defense, they can choose whether to fight the claims in court or settle the claims.

According to the accident report, the woman brushed a tree while driving. The ensuing damage to the fender was minimal, but the airbag deployed nonetheless. The force of the airbag allegedly caused neck injuries to the plaintiff.

The plaintiff claims that such a minor force should never have triggered the airbag and Subaru is negligent for allowing the airbag to deploy under these circumstances. Had the airbag not deployed, the woman would have suffered no injuries from the accident.

Is Subaru liable for this injury?

At present, there are no complaints of Subaru Outbacks deploying airbags after minor accidents and causing injury to a driver or passenger. This appears to be an isolated incident. Nonetheless, Subaru is strictly liable for any injuries caused by their products. That means that the plaintiff would not need to prove that Subaru made significant mistakes to cause the injury. It is likely that some form of manufacturing defect led to the airbag problem. It is also possible that work done to the vehicle by a third-party mechanic caused the airbag issue. Subaru will investigate both possibilities, allege the second, and force the plaintiff to prove otherwise.

If the airbag had deployed in any of the 11 years since the vehicle was purchased, the liability could shift from Subaru to the mechanics who serviced the car. In that case, Subaru would not be liable for their negligent resetting of the airbag.

It is unclear how substantial the plaintiff’s injuries were, but they appear to be quite substantial. The plaintiff is seeking over $12 million in compensation, so the case will likely move to trial with Subaru defending the claim and blaming the airbag problem on a third party or the plaintiff herself.

Airbag lawsuits are among the most common automotive product liability complaints you’ll find. Setting aside the Takata fiasco of exploding airbags, more common lawsuits involve airbags that deploy too forcefully, don’t deploy at all, or deploy randomly for no good reason while the vehicle is in motion. Obviously, these can all cause serious injuries and the product manufacturer is liable when they do. Subaru will have a difficult time defeating the claim entirely, but may be able to reduce the compensation figure considerably with the right counterarguments.

Injured in Miami? Call the Miami personal injury lawyers at the office of Alan Goldfarb, P.A. today and we can help hold the negligent party accountable.

By Alan Goldfarb, P.A. | Posted on May 16, 2022
« Man Sues After Thyroid Removal Turns Out To Be Unnecessary
Physician Sues Podiatrist Over Gangrene Amputation Injury »