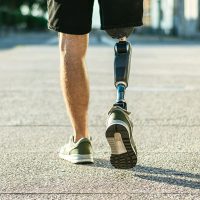 A physician seeking relief related to foot calluses and an ulceration ended up losing most of his leg after an infection set in. According to the physician, his podiatrist made several mistakes that ultimately cost him his leg. The physician continues to practice medicine, even as an amputee. However, his quality of life has been vastly reduced and the condition for which he was seeking remedy was made much worse.

According to the physician, he had continued to see the doctor to have the wound on his foot debrided. However, at some point, the podiatrist placed him in a cast. Shortly afterward, the physician ended up in the emergency room with a temperature of over 102 degrees. The cast was removed, but over the next several days, the physician’s health continued to deteriorate. He suffered septic shock, respiratory failure, and finally, the entire leg had to be removed due to gangrene.

Gangrene is a bacterial infection that results in the release of damaging gas which kills healthy tissue. It is generally not considered a major problem for modern people. But those with weakened immune systems or open wounds that are not properly healing are at an increased risk of gangrene and necrosis. As a result, the patient lost the majority of his lower right leg.

There are no specific allegations being made against the podiatrist that are available to us in the article. We would assume, however, that the physician believes that there was some lapse in the prevailing standard of care for the medical industry. Whether that means that the podiatrist should not have placed a cast on an open ulcerating wound, or that the doctor failed to do something that they should have done, we can’t be certain. It seems unlikely that placing a semi-permanent cast on an open wound is likely a helpful intervention. Such wounds need to be cleaned periodically, and in this case, the wound was bad enough that it needed to be debrided (have damaged tissue removed). In those instances, making the wound functionally inaccessible seems like the basis on which this lawsuit is being filed.

While right leg amputations are certainly not the preferred medical outcome, they are sometimes necessary when treating severely infected wounds. In this case, the physician would need to prove that the podiatrist failed to employ a common treatment that would have saved the leg. If the physician can prove such a treatment exists and was not employed by the podiatrist, then he will win his medical malpractice lawsuit against the podiatrist.

The Miami personal injury lawyers at the office of Alan Goldfarb, P.A. represent the interests of those who are injured by medical doctors, nursing home staff, or hospital staff. Call today to schedule a free consultation and learn more about how we can help.