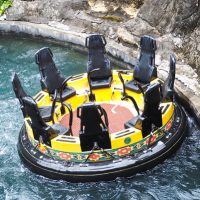 According to the complaint, poor maintenance, a lack of employee training, and the decision to operate the ride in the wake of maintenance issues all contributed to the death of the boy. The ride, called the Raging River, had caused injuries in the past. Among the new allegations, the family maintains that the ride was not properly inspected and maintenanced, and repairs were conducted cheaply and against the manufacturer’s explicit instructions. The theme park responded that they maintained a rigorous inspection procedure daily on all rides at their park and the ride underwent yearly inspections conducted by the state.

The theme park has recently been purchased by new owners who were not named in the lawsuit. The original company still exists, however, and retained legal liability after an asset sale. The lawsuit names the former owners specifically, a move that may allow the plaintiffs to hold the former owners and key executives personally liable for the death.

Lastly, the lawsuit now names a state inspector who signed off on the ride the day before the child died. It was discovered that the inspector had previously worked for the company raising new questions about the utility of the state’s inspection process.

It’s one of those rides where you and a few others sit in a raft while you float down a course and get water dumped on your head. Not exactly among the most death-defying rides out there. However, this ride had a fatal flaw. As soon as the ride began, the raft began striking the bottom of the course and it quickly filled with water. As the raft turned a corner, it capsized. When the raft capsized, the people in the raft were strapped in making escape difficult. The two children were sharing a harness at the time. Witnesses said they were trapped in the water for seven to ten minutes. Another passenger jumped from a raft and workers installing a fireworks display came in to attempt a rescue. The younger boy was pronounced dead at the hospital and his older brother was placed in a medically-induced coma, but managed to survive.

While the ride managed to pass the first inspection, the state conducted a subsequent investigation after the death and found 17 violations. Among those, they found that cheap parts had been used against manufacturer specifications to conduct repairs. Additionally, the theme park used an infomercial-brand sealant as opposed to an industrial-strength sealant to patch the floating rafts.

Injured at a theme park? Call the Miami personal injury lawyers at the office of Alan Goldfarb, P.A. right away. Our team can help you recover damages related to your injuries.