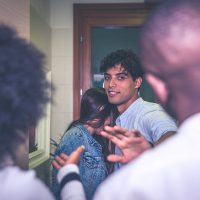 To make a long story short, a girl was sexually assaulted at a frat party and now she is suing the University and the fraternity for physical and emotional damages. The girl was forced to drop out of school for the semester and has lost educational opportunities as a result. She is currently at home dealing with PTSD and related trauma from the attack.

While specifics are difficult to come by, the defendant, in this case, has been charged with first-degree rape, sodomy, and unlawful imprisonment. The frat member has been suspended by the fraternity. The fraternity has been suspended by the university. And the university is facing a public relations nightmare after students protested sexual violence in Greek life on-campus prior to the incident. Further, the university issued notice to the on-campus fraternities that their conduct was not accepted prior to the incident. One last allegation coming from this is that multiple fraternity brothers walked into the room where the girl was being raped but did not intervene.

The defendant is currently awaiting a grand jury decision on whether he will be charged with the rape.

The lawsuit contains two legal theories. The first is a civil rights breach. The allegations include an unsafe environment for women that was allowed to fester within Greek life on campus. Further allegations include negligent hiring and staffing. Since the University was on notice that this type of conduct was happening on campus, they should have hired someone that could have made a difference. They never did. In fact, the people they did hire are alleged to be cronies of the University’s president and not qualified for the positions they hold.

The second element of this lawsuit is premises liability or negligent security. The plaintiffs will argue that the frat house is on university property and thus the university is responsible for it. If it isn’t, it may be more difficult to present a general theory of liability against the university for an incident that occurred at a privately-owned house. However, universities recognize fraternities and this gives them political power within the university. If the university failed to act on credible knowledge that sexual assault, violence, and sexism were prevalent on campus, then the premises liability claim may not be necessary.

Fraternities have national charters and are funded by alumni and current members. While their pockets aren’t as deep as a university’s lawsuits against them generally come with favorable settlements. And to be sure, fraternities are sued quite often.

It seems unlikely that either the fraternity or the university will be able to defeat this claim. The plaintiffs will claim that the university oversaw an environment that did not adequately protect female students.

If you have been injured due to the negligence of another party, call the Miami personal injury lawyers at the office of Alan Goldfarb, P.A. today to schedule a free consultation and discuss the matter in greater detail.

By Alan Goldfarb, P.A. | Posted on May 9, 2022
« Can You Sue A Jail Operator Who Intentionally Harms You?
Man Sues After Thyroid Removal Turns Out To Be Unnecessary »