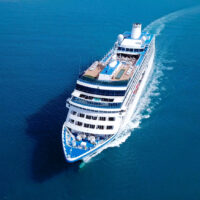 The passengers of a Carnival Cruise Ship that departed Port Canaveral in October of last year are suing the cruise line after the ship inexplicably “tilted” causing the passengers to lose their balance. There are currently three plaintiffs listed in the lawsuit who have allegedly sustained injuries to their knees, spines, and wrists, according to the complaint.

Carnival issued no comment on the lawsuit and stated that they had not received a copy of the complaint. Their captain, however, issued an apology to those onboard citing a “technical issue” related to an electrical switchboard malfunction. The plaintiffs are arguing that the crew was inadequately trained to handle the fin stabilizers which were affected by the switchboard malfunction.

According to one passenger, the ship did not “rock” but continued to lean in one direction. The fin stabilizers, which are meant to reduce the motion of the ship while it’s on the water, were causing the ship to overcompensate in one direction. Glassware, plates, and utensils slip off tables and passengers began screaming in panic. He described the situation “pure chaos”.

In response to the scare, the cruise liner offered the passengers $50 in credit to spend aboard the ship and expressed an apology to the disruption.

The vessel can carry over 3000 passengers and has over 1000 personnel aboard.

Do the Injured Passengers Have a Case?

In a personal injury lawsuit like this, the injured passengers must prove negligence in order to prevail. This requires that those in control of the ship failed in their duty of care in some way. In a case like this, it’s fairly easy. If the ship inadvertently teetered randomly creating a situation of chaos aboard the vessel, then it’s more likely than not that someone made a mistake.

In this case, the plaintiffs are alleging that the crew was inadequately trained. If this is the case, then the plaintiffs may be angling to receive punitive damages. Punitive damages are awarded when there is gross negligence of some kind. It helps when the attorney can show that injury was likely and that the passengers were in harm’s way due to an obvious oversight. In cases where trucking companies put unqualified drivers out on the road, they can be held liable for negligence as well.

While it remains a longshot that the injured passengers will be compensated with punitive damages, they have every reason to expect to be compensated for their medical expenses, lost time from work, and pain and suffering. It will not even be necessary for the plaintiffs to show why the mistake happened. The fact that it did happen is, in itself, enough proof that there was some form of negligence aboard the ship.

The Miami legal team at the office of Alan Goldfarb P.A. litigates injury lawsuits against negligent parties. If you’ve been injured by another’s negligence, give us a call or talk to us online to set up a free case evaluation.