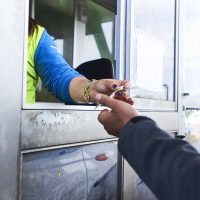 A lawsuit filed in New Jersey accuses Tesla of negligence and liability in an accident that left a toll booth operator injured. According to the complaint, a Tesla Model X accelerated on its own and crashed into the toll booth. The lawsuit claims that Sudden Un-commanded Acceleration events are a known problem for 2016 Teslas. 13 such claims were filed against Tesla in 2016.

In response to the lawsuit, Tesla denies that their negligence contributed to the crash and also denies that the driver of the Tesla was responsible. Instead, they blame an unknown third party and the toll booth operator. It is unclear how a toll booth operator can be responsible for a vehicle smashing into their toll booth, yet that is the backbone of Tesla’s defense. The driver and the owner of the Tesla have filed a cross-complaint against Tesla to indemnify them of any damages resulting from the plaintiff’s allegations. It is unclear if Tesla has responded to that complaint.

Tesla is facing several lawsuits related to its autopilot. However, the biggest news to come out of the industry is that drivers are now being charged with manslaughter in Tesla-related accidents in which the autopilot was relied on exclusively. However, that hasn’t stopped individuals who have purchased Teslas from claiming that Tesla has oversold the capacity of its autopilot. While Tesla maintains, for legal reasons, the position that the autopilot is only an advanced driver-assist program, it has named the AI that operates this driver-assist program an “autopilot”. This has led consumers to believe that the vehicles can operate themselves autonomously. These allegations have resurfaced in the complaint described above. Tesla is accused under consumer fraud statutes and false advertising as well as products liability and general negligence.

Essentially, plaintiffs are claiming that Tesla has oversold its autopilot’s ability to operate autonomously. Plaintiffs and others were erroneously led to believe that Tesla vehicles could operate without a driver. This has led to several deaths, accidents, and a few situations where drivers have been arrested for reckless driving after being pulled over while operating their vehicle from the backseat. It isn’t safe to do this, either for you or other drivers on the road.

Tesla’s defense to these allegations don’t sound like they’re in the same world as the plaintiff’s complaint. How is a toll booth operator responsible for a vehicle that crashed into the toll booth? How can a third party contribute liability to a sudden acceleration event? Is Tesla claiming their vehicle was rear-ended? We really don’t know. But it sounds like the facts are in dispute, which means it’s likely this case is headed to a jury.

The Miami personal injury lawyers at the office of Alan Goldfarb, P.A. represent the interests of injured plaintiffs in personal injury lawsuits. Call our Miami office today to schedule a free consultation and we can discuss your next moves immediately.