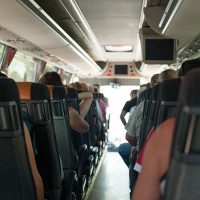 A lawsuit has been filed on behalf of several Chinese tourists who were injured in a tour bus crash on a remote highway. Four of the tourists died. Several others sustained severe injuries. Family members and survivors of the incident blame the State of Utah for failing to either fix the damaged road or post warning signs on the road. According to the tourists, the secluded stretch of highway had no rumble strip.

The bus driver left the roadway and then attempted to overcorrect causing the bus to flip and roll over. All 30 passengers sustained some form of injury.

The case against Utah

The road had been paved the day before. But the roadway was so narrow that it was easy for your tires to get traction on the shoulder. Since the shoulder was rough, unpaved, and soft, while the road itself had been freshly tarred. The plaintiffs allege that the contrast between the soft shoulder and the hard roadway caused the driver to oversteer the wheel in the opposite direction resulting in the flip and rollover.

The Utah Department of Transportation is declining to discuss the pending litigation. However, they are not the only named defendants. Several contractors responsible for the work done on the road are also named in the lawsuit. The National Highway Transportation Safety Administration has rebuffed the plaintiff’s allegations that the signage or the structure of the highway were factors in the crash.

Even if the NHTSA is correct and the State of Utah contributed 0% liability to this incident, the tour company that operated the tours is still responsible for taking the bus on a poorly-paved highway. Nonetheless, the company will blame the state and the state will blame the company leaving jurors with the impression that no one is really liable for this accident because the two defendants are naming each other. This could put plaintiffs in a pickle. Nonetheless, if they have a strong case against the tour company, they would have a better chance at recovering money from them than they would from the State of Utah which places caps on damages in lawsuits filed against the state.

An investigation conducted by the NTSB concluded that a lack of safety standards on the bus’s roof and windows contributed to the death toll and severity of the injuries. They also found that inconsistent seatbelt use was a factor in the severity of the injuries. Finally, they recommended a lane departure warning feature in commercial buses to prevent this type of tragedy from occurring again.

If you’ve been injured due to the negligence of a tour bus driver (or anyone else for that matter), call the Miami personal injury attorneys at the office of Alan Goldfarb, P.A. today to schedule a free consultation and discuss your injuries and the events surrounding them in more detail.