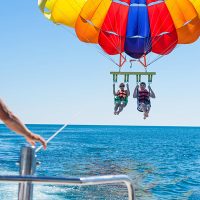 A Florida boat captain who provides parasailing experiences for tourists is now facing manslaughter charges after two of his tourists died in a preventable accident. According to reports, the winds that day were too high to safely parasail. The State of Florida has strict regulations concerning tourist activities, and the boat captain failed to ensure that his guests were safe. Hence, he is facing a charge of manslaughter, and wrongful death lawsuits filed by the families of the tourists.

Authorities say that the couple were dragged through the water when their parasails dropped too low. At that point, the tour should have been stopped for safety reasons. However, the boat captain allowed the tour to continue with fatal results.

Our firm does not represent those charged with crimes. However, criminal convictions can play into civil litigation. In terms of precedence, the criminal case would go first. Since the standard of proof is higher in a criminal case than it is in a civil case, the verdict can be presumed from the criminal proceedings. In other words, a plaintiff would not have to prove that a man convicted of manslaughter was criminally negligent because that would have already been proven in accord with a much higher standard in criminal court.

The civil trial could then proceed simply with a determination of damages. In other words, the plaintiff would not have to try their case on the facts. They’d only have to establish their injuries and damages. In this case, since the injuries are death, it would be the estates of the victims and their families who are the plaintiffs.

If the state loses its bid to charge the captain with manslaughter, the higher standard of proof would not prevent the plaintiffs from filing a wrongful death lawsuit against the captain and his company. This is precisely what happened in the OJ Simpson trial. Simpson was acquitted of criminal charges, but lost a wrongful death lawsuit filed by the Goldmans. Since the standard of proof is lower in civil court, the fact that OJ was acquitted at trial didn’t hamper the lawsuit against him.

That being said, a manslaughter charge is a serious accusation. Essentially, the police are accusing the defendant of not giving a single care about the fate of his tourists. They are saying his conduct was so careless and negligent, that it shows a casual disregard for life. While the captain’s conduct was certainly ill-advised, the state may have difficulty convicting him on a manslaughter charge.

The Miami personal injury attorneys at the office of Alan Goldfarb, P.A. file negligence lawsuits on behalf of injured plaintiffs. Call our office today to discuss your situation and we can discuss your options to hold the negligent party accountable.