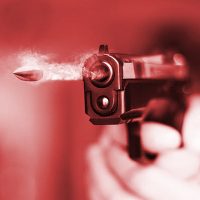 Police were called to diffuse a domestic disturbance between a grandson and his grandfather. Within 32 seconds of showing up, both the grandson and the grandfather were dead. Now, the family has filed a wrongful death lawsuit against the township claiming that the officers failed to comprehend the situation and just decided to blow everyone away.

The department had withheld the names of the deputies involved in the shooting but the press has since learned the names of the two deputies. The initial press release concerning the incident doesn’t fit the facts either. According to the arresting officers, they shot the grandson after he had stabbed the grandfather in the neck.

As the deputies entered the scene, the grandson was holding a knife on the grandfather. The grandfather did not have a gun or any other weapon. It remains unclear why the police saw fit to shoot the victim of a domestic violence incident, but they are now facing a wrongful death lawsuit because of that choice.

In this case, the police made no effort to de-escalate the situation. Instead, they began screaming orders at the knife-wielding suspect who then lunged at his grandfather with the knife. At this point, the officers unloaded their weapons in the general direction of the grandson, killing both the grandson and his grandfather, the victim. The grandfather would have been better off taking his chances with the emotionally-disturbed knife-wielding grandson than asking the police to intervene on his behalf. Hence why folks are interested in “defunding the police”.

The police officers were cleared of wrongdoing in the shooting despite the fact that the victim was killed. In fact, in subsequent reports, the fact that the victim was killed by the police was left out of every report on the matter. Nonetheless, there is no evidence that the now-deceased grandson actually harmed his grandfather with the knife while the grandfather has bullets in his body from the exchange.

In some places, a failure to disclose such evidence would get you terminated from the force. In other places, authorities will back police officers who use deadly force carelessly. It depends on where you live. In this case, authorities are attempting to protect themselves from the truth and by the time you’re in that situation, you’ve already lost as almost any criminal can tell you.

Nonetheless, local police will continue to double down on their belief that the complainant was somehow a threat and that shooting first and asking questions later is a valuable service to the community. Nonetheless, it remains hard to imagine how a complainant ends up dead after calling for help.

The office of Alan Goldfarb, P.A. represents the interests of those who have been injured by negligent parties in Miami. Call our Miami personal injury lawyers today to schedule a free consultation and learn more about how we can help.