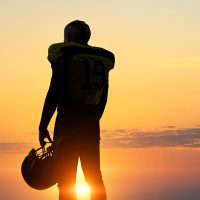 The entire U.S. had a shared moment of empathy of love when backup safety Damar Hamlin collapsed on the field after taking two steps from what appeared to be a normal football play. At that moment, players gathered around Hamlin forming a circle after it became apparent that they were attempting to resuscitate him. The game was called while teammates waited for news that Hamlin would be okay.

We will never have an official diagnosis of what caused Hamlin’s heart to stop that day. At the time, a condition known as commotio cordis appeared to play a factor. However, the condition is associated with baseball and hockey—not football. It requires a blunt-force trauma to the left side of the chest at a specific moment. The trauma is generally caused by something small like a baseball or a hockey puck. In Hamlin’s case, the impact had to be caused by a shoulder pad. If possible, then it might be time to look at the shoulder pad.

In 2017, a college football player died after alleging reporting chest tightness to coaches and trainers. According to the family, he had mentioned it before but was told that he likely had a cold. After collapsing on the practice field, he was rushed to the hospital where he died of undiagnosed heart issues. The family sued the university claiming they should have handled the matter better.

The family’s lawsuit was dismissed after the school presented a waiver to the court stating that they were immune from lawsuits. While waivers will waive liability for incidents like Hamlin’s that occur in the field of play, they do not limit liability to a coach who fails to render aid when a player collapses or fails to heed credible signs of distress. There are supposed to be people with medical training there.

Ultimately, the family appealed the ruling on the basis that the waiver did not waive any and all liability, but was restricted to normal football plays and injuries. His family has since created a foundation that supplies parks and fields with AEDs, the very device that saved Damar Hamlin’s life.

At this point, the family’s lawsuit has been reinstated. The trade-off was that they can no longer pursue punitive damages against the University.

The future of football

The Damar Hamlin incident was a freak accident, so football is not going anywhere. If there is one sport that will be destroyed by head injuries or potential problems it will be luge. Lugers tend to get severe head injuries from micro-concussions that occur while traveling around courses at high speeds. Ultimately, protecting football players is easier than protecting lugers.

Alan Goldfarb, P.A. represents the interests of injured parties filing lawsuits against negligent defendants. Call our Miami personal injury lawyers today to schedule a free consultation and learn more about how we can help.