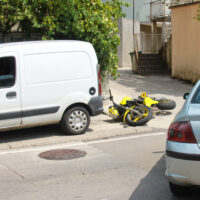 The family of Sean Parke, a Fort Myers teen who was killed in an auto accident, is pushing for stricter laws concerning vision tests and drivers. The young man was hit when a 78-year-old motorist, who is legally considered blind, struck his motorcycle in 2014.

Although Florida is technically considered a no-fault state as far as auto insurance is concerned, those injured in auto accidents are allowed to file suit when their injuries are extensive or a death results from the accident. Since the young man was killed, his family was allowed to file a lawsuit against the woman on behalf of his estate.

The jury awarded Parke’s estate a $5 million judgment after it became apparent that the woman should not have been operating a motor vehicle. Evelyn Miozza, who is considered legally blind, also injured her passenger, identified as Shirley Silves. The passenger died three months later.

Highway Patrol conducted an investigation and found that Parke was speeding, doing over 20 mph over the speed limit for the area. Nonetheless, the jury found that Miozza was over 85% responsible for the accident

The police report stated that Parke’s speed was a major factor in the crash. Miozza was not cited for the incident. The police found that Parke’s reckless driving was the primary cause of the accident. They said that he was not only driving too fast, but he was weaving in and out of traffic and following other vehicles at an unsafe distance.

But attorneys discovered that Miozza had no way of seeing the young man. It became apparent to them during Miozza’s deposition that there was a serious problem with her vision. She was incapable of reading a map that was placed right in front of her.

The accident occurred as Miozza was attempting to make a left-hand turn. During the turn, her vehicle collided with Parke’s resulting in his death. The police erroneously assumed that because the victim was a young man on a motorcycle, that he was to blame for the accident. That did not turn out to be the case.

Attorneys for the family pushed to get Miozza’s vision records. It was discovered that not only was the woman legally blind without her glasses, but she suffered from debilitating cataracts that her doctors had recommended she have surgery to correct. Despite her doctor’s recommendations, Miozza elected to forestall the surgery and a young man died as a result of that decision.

The jury awarded his family and estate $5 million for their loss. The family now hopes that the State of Florida will issue tougher restrictions on drivers who are not qualified to operate a motor vehicle.