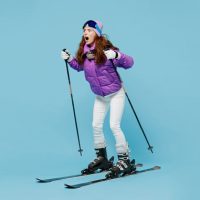 A woman has filed a lawsuit against an indoor ski slope company after she sustained serious and permanent injuries from an accident that occurred on premises. The lawsuit alleges that the staff of the indoor attraction was negligent, reckless, and did not abide by either their own company’s policy or prevailing regulations for indoor attractions and skiing resorts. While the company did not offer much comment on the allegations, the press release did mention a waiver that all participants sign prior to enjoying the attraction.

Waivers can limit a company’s liability in certain situations, but they cannot eradicate a company’s obligation to provide safe premises for its customers. Nonetheless, more than just an injury on premises must be established before the plaintiff can win her lawsuit. Are the allegations strong enough?

According to the plaintiff, who was a novice skier, she took a beginner’s course. At some point, she was instructed to the top of a “mountain”. Noting that there were only two paths down and feeling comfortable with neither of them, the woman expressed that she was afraid to go down the slope to the guide. Neither route was labeled for beginners. The woman, who was obviously afraid to ski down the slope, wanted to take the lift back down. However, the staff would not allow it. The staff told her that if she wanted to get back down the slope, she would have to remove her skis and walk down. The woman attempted to walk down, but it was too icy. Eventually, she tried to ski down, but that’s when she injured herself. Her attorney says that the novice skier should have never been told to go to the top. The woman was diagnosed with a torn ACL at the hospital.

The merits of the lawsuit

The plaintiff is essentially alleging that the ski resort caused her injury because they failed to accommodate a novice skier. Since the attraction says that they can accommodate novice skiers, they need to be able to do so in a manner that does not cause injury. In this case, they took a novice skier up an intermediate slope, and she injured herself as a result. Is this enough to establish liability and win her lawsuit against the indoor ski resort?

Almost certainly. If the ski resort said that they only have mountains for intermediate or expert skiers, then that would be a different story. Because they advertised that they can accommodate novice skiers and then ended up negligently causing injury to win, they are on the hook. Had the staff warned the woman that the slope was too dangerous for her level of expertise, then they would be off the hook. If the woman would have been allowed to go down the lift the way she came, then they would be off the hook. Because the woman was forced to either walk down an icy slope or ski down, they are liable.

If you’ve been injured in an indoor entertainment attraction, call the Miami personal injury attorneys at the office of Alan Goldfarb, P.A. today. We can recover damages related to your medical expenses, lost wages, and reduced quality of life.