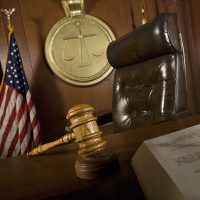 A federal judge has just recused himself from a case involving a woman who was shot and killed by Oxford police. The lawsuit has been filed against the City of Oxford. The judge stepped down because he was acquainted with some of the witnesses and family members involved in the lawsuit, and it, therefore, could have ended up an appealable conflict of interest. The judge had close relationships to city officials involved in the shooting. The case has been reassigned to another judge working out of a different county.

Due to the switch at judge, the city has been given an additional 40 days to file its response to the plaintiff’s complaint. The officer who is at the center of this wrongful death lawsuit has been pleaded guilty to first-degree murder and will spend the rest of his life behind bars.

The officer who is not a convicted felon was conducting a “welfare check” on the victim. The victim was asleep in her bed when the officer discharged his weapon directly into the woman’s head, killing her instantly. The officer was in uniform at the time of the shooting.

The plaintiffs blame the city for hiring the officer because he had an interesting past. The officer’s wife died under suspicious circumstances years earlier. The officer was considered a person of interest in the case, but eventually, her death was ruled a suicide. It is believed that the officer had a relationship with the deceased before shooting her.

The City is accused of civil rights violations in the death of the plaintiff. They are accused of negligently hiring an unstable officer who had serious question marks surrounding him. Since the City put the public in harm’s way, the city is liable for the woman’s death. There is very little defense to the charges other than to claim that the sleeping woman was pointing a gun at the officer, perhaps due to Ambien. It is one of the few cases where a self-defense argument would be utterly meritless in the courtroom. Here, the defendant entered his girlfriend’s house and shot her in the head under the color of law.

The surviving family members of the victim have filed a wrongful death lawsuit against the City alleging that their negligent hiring placed the public in harm’s way. In a case like this, where the negligence is so egregious, plaintiffs would generally sue for punitive damages which are awarded to punish a defendant for extreme carelessness or intentional malice. However, since the defendant is the government, the plaintiffs cannot pursue punitive damages. Any award they receive will either be capped by sovereign immunity or they will have to file a claims bill with the legislature, which happens usually because of media pressure.