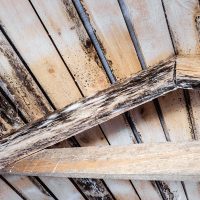 Water damage coming from leaky roofs that were not properly flashed properly. In one case, a Texas family fell ill with a host of severe symptoms related to toxic mold exposure. When they took down a wall, they found the interior riddled with black mold. This resulted in serious illness to the family.

The mother suffered a series of migraines that eventually resulted in a tumor while her children developed sinus complications, developmental delays, mood disturbances, and anxiety. According to experts who investigated the house, the roof hadn’t been flashed properly allowing water damage to seep into the walls causing black mold to grow. Black mold had spread everywhere throughout the house. As a result, the family lost their home and most of their possessions.

A Florida woman won $48 million in a lawsuit against her condominium after a leaky roof led to widespread mold contamination in her apartment. Her attorneys said the woman developed “a host of symptoms” after moving into her apartment. She was diagnosed with “chronic inflammatory response syndrome”, a progressive illness that is very difficult to diagnose. Symptoms include memory disorders, brain fog, mood disorders, and the loss of executive function. Is caused by the introduction of specific biotoxins into the body. Black mold is among the known biotoxins that cause chronic inflammatory response syndrome. Diagnosis involves measuring the amount of inflammation in the brain. Because the condition causes brain damage, it results in a host of neurological symptoms. These symptoms get progressively worse, but treatment can help. There is no cure for the condition.

The lawsuit was filed against the condo and a company that was contracted to fix the roof but didn’t. The condo and other defendants quickly moved to settle with the plaintiff, but the roofing contractors fought the claim and lost to the tune of $48 million. However, their insurers have yet to pay the sum. A second lawsuit has been filed against the insurance companies to recover the jury award.

Not every toxic mold case is compensable. When it comes to landlords and tenants, the landlord has the responsibility to ensure the premises are safe. However, homeowners purchasing a property may not be aware the home is infested with mold until they develop symptoms. By then, there may be no one to sue because homeowners are responsible for their own homes. That means that the only party that could be held accountable is a company that was charged with fixing the roof and failed. Unless the home was constructed recently, toxic mold lawsuits can be tough to win.

If you have been injured due to a dangerous condition in your apartment or condominium, call the Miami personal injury attorneys at the office of Alan Goldfarb, P.A. today to schedule a free consultation and we can discuss your next steps in detail.