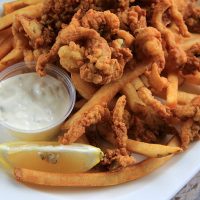 A man recently won a wrongful death lawsuit filed against a nursing home after his mother choked on a clam and died. The son was awarded $1 million in damages plus interest. The woman had been at the nursing home for just 13 days when she choked on a “food bolus”. A medical examiner ruled the death asphyxiation due to choking.

According to the lawsuit, the woman had dentures and was on a granular diet when she was served an entire clam. In other words, the nursing home violated her treatment protocols and placed her in danger. Emergency first responders pulled a large clam from the woman’s airway. Strangely, however, the nursing home ruled her cause of death as a seizure and claimed that she had not eaten three hours prior to the surgery. The nursing home claimed that they don’t serve clams and are unsure where the clam came from. If true, then the nursing home would not have violated her treatment plan. Some nefarious clam-wielding third party is responsible for the woman’s death.

The case of the fatal clam

The problem for the nursing home is that their arguments are tripping over one another. First, they claim that the woman died of a seizure. Then, they say that they don’t serve clams, so they’re not responsible. But if you’re not responsible, you don’t need to challenge the official cause of death. You can agree with the medical examiner and simply claim the woman got the clam from elsewhere and they are not responsible. So, in a world where the woman got the clam from a nefarious third party and she did not choke to death as the medical examiner said, we don’t need to know where the clam came from to assume that the nursing home is not being honest. And, if you’re going to argue that the nursing home does not serve clams and is thus not liable, then you don’t need to challenge the medical examiner’s findings at all to dispute liability.

The case survived a medical malpractice tribunal set up to determine the validity of the allegations. It was determined that there was enough evidence to proceed to trial.

Failure to follow a treatment plan is medical malpractice. If you’ve lost a loved one in a nursing home, call the Miami personal injury lawyers at the office of Alan Goldfarb, P.A. today to schedule a free consultation and learn more about how we can help.