Many Are Injured At Trampoline Parks, But Is The Park Negligent? 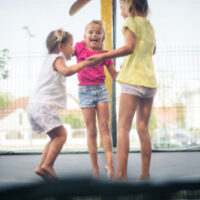 Trampoline parks are a great deal of fun for young people all across Florida, but they are also responsible for a number of injuries. While the parks themselves only furnish people with the trampolines and cannot be responsible for every injury that occurs, it’s also true that the sheer quantity of reported injuries leaves many wondering what can be done.

Over the past two years, over 300 Floridians have reported injuries sustained at trampoline parks. Paramedics had to be called in at least 70 of those incidents. Are the parks to blame or is it other children who are causing these injuries?

The Case against Trampoline Parks

On the other hand, so many young people are being injured at these parks that you’d think there would be major liability issues. A 2016 report on trampoline injuries found that the number had increased over 400% over previous years. The question then is where does the park’s liability lie?

Roller rinks were once a very fashionable place for young people to go. Nowadays, trampoline parks are the new roller rinks. Both of these activities have a strong propensity to potentially cause injuries. Is the roller rink liable when one of their patrons causes an injury to someone else?

The teen mentioned above did file a personal injury lawsuit against Off the Wall Trampoline Park. It is one of 12 lawsuits that the park is currently fighting. The teen’s lawyer is arguing that a lack of supervision was a major cause for why so many young people are being injured at parks all across Florida.

There are, however, two major factors that are working against the girl. The trampoline park is saying that her own carelessness caused her injury. In addition, her father signed a waiver absolving the park of liability in the case of an injury.

On the other hand, a waiver does not absolve Off the Wall from providing its patrons with sufficient supervision. No pool would be complete without a lifeguard. If the trampoline park is banking on the waiver exculpating them of any liability then they may be making a major mistake. If a judge believes that the company is using the waiver to avoid hiring and properly staffing their park they’ll almost certainly toss the waiver.

Miami personal injury attorney Alan Goldfarb can help you recover damages when you’ve been injured by another’s negligence. Give us a call at 305-371-3111 or contact us online, and we can begin preparing your case immediately.